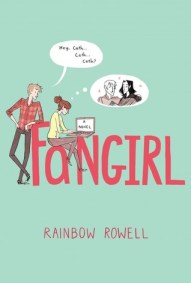 “What are those, leg sweaters?”
“They’re leg warmers.”
“You’re wearing at least four different kinds of sweater.”
“This is a scarf.”
- Page 93

From the author of the New York Times bestseller Eleanor & Park. A coming-of-age tale of fan fiction, family and first love.

Cath is a Simon Snow fan.
Okay, the whole world is a Simon Snow fan…
But for Cath, being a fan is her life—and she’s really good at it. She and her twin sister, Wren, ensconced themselves in the Simon Snow series when they were just kids; it’s what got them through their mother leaving. Reading. Rereading. Hanging out in Simon Snow forums, writing Simon Snow fan fiction, dressing up like the characters for every movie premiere.
Cath’s sister has mostly grown away from fandom, but Cath can’t let go. She doesn’t want to.
Now that they’re going to college, Wren has told Cath she doesn’t want to be roommates. Cath is on her own, completely outside of her comfort zone. She’s got a surly roommate with a charming, always-around boyfriend, a fiction-writing professor who thinks fan fiction is the end of the civilised world, a handsome classmate who only wants to talk about words… And she can’t stop worrying about her dad, who’s loving and fragile and has never really been alone.
For Cath, the question is: Can she do this? Can she make it without Wren holding her hand? Is she ready to start living her own life? Writing her own stories?
And does she even want to move on if it means leaving Simon Snow behind?

I forget why I bought this book – it’s not my usual genre. Maybe I was after something new? It’s one of the only green books to survive my most recent clear out however and having discovered the existence of Carry On (through HappyHelloCo bookmarks…), which I decided I wanted to read, it meant I needed to read this first and I chose it as my first April book. I expected to possibly enjoy this first step towards the second book, that it would be fluffy but tense, as I often find contemporary books but that it would simply be a means of getting to the fantasy based book 2. Boy was I wrong, I really loved this! I thought it was well written and funny.

I really identified with Cath and found her a fantastic character to hang out with. I feared a love triangle that never really materialised and a big bust up that almost happened but then didn’t. And I liked that. I liked that it sort of pointed out how silly they were while almost falling into one.
I also loved Levi. I loved his problems and how he coped with them, his coping mechanisms were great and I liked how he had contingency plans and I loved that he passed that initial test too. It shows a promising future for team work and I wished that the book showed some more of that. It did suggest that it was happening but that was cute and I liked seeing this cute.

Wren was an interesting character too. Caths twin, she was fed up of being a twin and tried branching out. I can understand why she wanted to do this, but I also think a little less of her for abandoning her sister quite the way she did. Of course, this is told from the point of view of Cath, so we can’t see what was up with her and I do wish we’d had some time with Wren at least. Her motivations are something I don’t know and I always like to know the whys. I’m also SUPER curious about The Event that she won’t talk about too. What happened?!

I thought the excerpts from the Simon Snow stories at the end of each chapter disrupted the flow – I recommend you go back and read them after instead of during. This was odd because I was sure that Carry On was going to be more my story to read but I always was impatient for more of Cath and her world.
Apart from that I thought the story flowed well and while I was waiting for The Big Event (too many fantasy books?) it never came. There were several pivotal moments of course but that’s life and nothing too outrageous or ridiculous happened either which was good.

In the bonus questions with Rainbow, she said that she didn’t read Fangirl fanfiction because she wasn’t finished with the characters yet and that is fantastic news!! A book two? I feel one could be quite easily done. I for one found the ending was pretty abrupt. What happened to Carry On? What was her story? What about the summer? Year two? The rest of her life?! Ok, it wasn’t that abrupt, looking back. But it sure felt like it when you’ve spent half the day buried in the book…

I’ve only recently re-discovered fanfiction. I was big into it before I started my own worlds – unlike Cath I have hundreds bursting to life in my mind – but a TV show I enjoyed wasn’t renewed for a second season and I wasn’t ready to say goodbye! So y’know what? I might just look up some fangirl fanfiction because that will be some kind of humourous almost-inception thing…