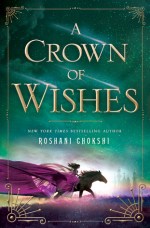 An ancient mystery. An unlikely union. For one young princess in a state of peril, a dangerous wish could be the only answer…

She is the princess of Bharata—captured by her kingdom’s enemies, a prisoner of war. Now that she faces a future of exile and scorn, Gauri has nothing left to lose. But should she trust Vikram, the notoriously cunning prince of a neighboring land? He promises her freedom in exchange for her battle prowess. Together they can team up and win the Tournament of Wishes, a competition held in a mythical city where the Lord of Wealth promises a wish to the victor. It seems like a foolproof plan—until Gauri and Vikram arrive at the tournament and find that danger takes on new shapes: poisonous courtesans, mischievous story birds, a feast of fears, and twisted fairy revels. New trials will test their devotion, strength, and wits. But what Gauri and Vikram will soon discover is that there’s nothing more dangerous than what they most desire.

Honestly, these guys were lucky!!
I didn’t quite understand what the Lord of Treasures seemed to be saying his reasons were or the why for (I’m convinced it was in fancy language and I just wanted him to hurry up), but I hope what I did understand was true. And at least he had actual reasons, ’cause this story spent much time in a place that felt like many Fae Courts have felt and much is done in the Fae Courts ‘for fun’ which never bodes well for the mortals tricked and trapped there….this is not one of those stories,
Everything seemed to be conveniently set up, which I believe was the point. It was all looped around and planned out with only one goal. And I liked it!

There was a lot of character growth in this book because it was about growth. Gauri and Vikram are forced to work together, pretty much from the get go, for a common goal and they have to do it quickly. Because of this a lot of posturing has to be left at the door and if they’d met under any other circumstance I think they would have not got along on principle. They are both quite tricky people.
I found it quite interesting to see what the Lord of Treasures deemed to be The Greatest Treasure and how it was presented to Gauri and Vikram. Not lots of little bits, but all one. I was expecting him to be a Fae character but he was nothing like that at all.
And while the book had it’s own moral to it, it hasn’t forgotten about book 1 and it recaps some of the same issues in here. on a smaller scale, just to remind you.

This didn’t feel as epic as The Star-Touched Queen. Perhaps because it didn’t have a history but instead had a future? Or it could be because I recaped TSTQ and this kind of books always has new gems for a second read and perhaps ACOW will seem more epic upon a re-read too.
While this isn’t a part two type continuation of book 1 I do recommend that you read The Star-Touched Queen first. There are many connections, not the least being these main characters and of course the Night Bazaar!! It was nice seeing how it was after the end of TSTQ and interesting to hear that someone from that book had a different title in here. I wonder if it was always her title and she lied, or if she was newly named between books?

Where book one was told completely from Maya’s point of view, this had three different ones. One in first person and two in third. There’s not really a pattern to when they switch, not that I noticed anyway, while Gauri seems to be the main character as she has more chapters, there is also a lot of Vikram’s POV too. Sometimes chapters might overlap a little too, but not always as much as I’d like – I love more than one point of view on things!

In conclusion, I loved the whole vibe of this book and in writing this review I realised far more of the intricacies than I did while reading it so the rating went up by half a star.
Or I could be reading what’s not there…but I choose not to believe that.
I liked the ending, I liked how they grew as people, how they came to believe in themselves and the future stretching out in from of them. What I would have liked even more is to see some of that future – sure, they’ve each done some sorting, but what next?!

I hope to see more stories in this world, even if it’s just a book of novellas! I have some ideas…
How Maya and Amar first met (EDIT: APPARENTLY THIS EXISTS AND WILL BE AVAILABLE FROM 2ND of MAY!!!),
Amar finding Maya again in her fathers palace – from HIS point of view,
Maybe something from right after Maya left from Gauri’s POV?
And of course, the what-happened-next after THIS book!