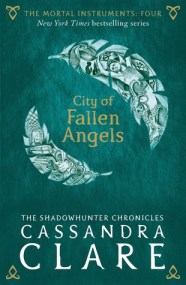 The Mortal War is over, and sixteen-year-old Clary Fray is back home in New York, excited about all the possibilities before her. She’s training to become a Shadowhunter and to use her unique power. Her mother is getting married to the love of her life. Downworlders and Shadowhunters are at peace at last. And—most importantly of all—she can finally call Jace her boyfriend.

But nothing comes without a price.

Someone is murdering Shadowhunters, provoking tensions between Downworlders and Shadowhunters that could lead to a second, bloody war. Clary’s best friend, Simon, can’t help her—his mother just found out that he’s a vampire, and now he’s homeless. When Jace begins to pull away from her without explaining why, Clary is forced to delve into the heart of a mystery whose solution reveals her worst nightmare: she herself has set in motion a terrible chain of events that could lead to her losing everything she loves. Even Jace.

I’d previously read 1-3 of this series but I re-read them last summer so that I could keep going with 4-6…which I didn’t do….’cause I’m just silly like that. But I think with a double read under my belt and all the tv show stuff going on I’ve managed to stay in this world semi enough to remember a decent amount.

At some point I fell into the spoiler pool and I know way more about this world that I should for what I’ve read but never mind.
I was looking forward to an ajusted Alec and cute moments between him and Magnus even though they aren’t the centre of the story – except that they were on holiday for at least half the story! (Can we have this as a novella please?) When they did turn up again they had a bit of a tiff. It wasn’t as big as I was expecting and I can see Alec’s point, while he’s not as obsessively insecure as Jace he’s still pretty insecure (Why does no one realise all the insecurities these guys have?! Simon seems to be the most well adjusted guy here! And that’s saying something, but we’ll get to him in a minute) Clary seems to think he’s more comfortable in his skin now and Magnus tells him it like it is and it’s adorable. They still have some way to go though and I’m looking forward to their happily ever after. I want to see that Alec and that Magnus, they should be magnificent.

I was also looking forward to a happy Jace. He knows who he is now, YAY!!!!! So that’s all no longer a problem and all good and…
No. No happy Jace. He’s too insecure to be happy. FOOLISH BOY!  (WHY?!
It’s going to get worse I feel before it gets better. (It better get better….)

I knew there was a situation regarding Simon coming up and I knew that there was a lot of “NO!” about it all. So I was expecting a lot more from it. Personally the IDEA of it is out of character for him, but the reality is 100% teenage geek boy turned vampire. Total disbelief that that was happening to him is most likely what got him into that situation in the first place. So I don’t have a real problem with that. And I like his new friend! His back story is sad and I hope it gets worked out (Totally was suspicious of him – thought he was Sebastian in disguise.)

I have to say that at this point I really don’t like Clary’s mother. I mean she’s not winning any mother of the year awards, but right now she’s really not my favourite. A lot of Jace’s recent insecurities come from her behaviour with regards to him. She hadn’t tried to get to know him, she knows who he thought he was and he 100% believed that was him. She also knew his parents. At no point does it seem like she’s even chatted to him, let alone reassured him and told him anything about his parents. You can forgive the Lightwoods the same mistake perhaps – they have something important occupying their time after all.

I’m so pleased that Clary communicated at the end. And while I don’t think she did too well (nor did Jace) something was resolved – finally. However things are going down hill and I’m semi reluctant to read on. I will, of course I will. There’s so much more to learn! (and spoilers to place) I think the secret is waiting a little while but not too long between books.

There’s so much useless info I’ve picked up from the internet and I have no idea how much is Cannon. How can this all fit in with things they way they are now? How do half the people turn up in a place that that can happen? I want to find out!

Also I’m confused about something. SPOILER!!!! Don’t read this if you’ve not read the other books!!!

The star birthmark that identified Jace to his grandmother was deemed unique to his family line. Except I’m pretty sure in this it says Izzy has one and that all Shadow Hunters did. So what gives?!