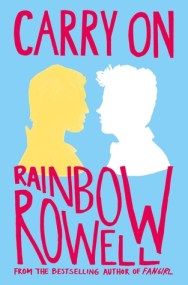 “I guess we used to fight more about stuff like this. And then I almost killed him, and squabbling over the curtains suddenly felt ridiculous.”
-Page 179

That’s what his roommate, Baz, says. And Baz might be evil and a vampire and a complete git, but he’s probably right.

Half the time Simon can’t even make his wand work, and the other half, he sets something on fire. His mentor’s avoiding him, his girlfriend broke up with him, and there’s a magic-eating monster running around wearing Simon’s face. Baz would be having a field day with all this, if he were here – it’s their last year at Watford School of Magicks, and Simon’s infuriating nemesis didn’t even bother to show up.

This is a fanfiction 7/8th book to a spoof Harry Potter from a fictional reality and it’s fantastic.
You don’t have to have read Fangirl or even Harry Potter to enjoy this – (but honestly if you haven’t read them you’re really going to wonder why this is starting in the last year of school!) Though if you haven’t read either, you’re going to miss out on some serious enjoyment! Many little things mirrored things that happened in HP and without having read the books you won’t pick up on them and I loved picking up on them, I thought they were so clever! I can’t even remember any to give you examples, but I found myself grinning a lot…

I really enjoyed the stereo-typicality of it all. Even if that isn’t a word. Simon was the golden (and curly, YAY!!) chosen one and Baz was the dark haired, widows peaked vampire. Except no one seemed to believe Simon when he ran around telling them all Baz was a vampire. Maybe because he looked so much like one?

What I didn’t enjoy was the ending. What ending?! When will he learn who he really is?! He’s suffering an identity crisis! How did he get where he grew up? Who put him there?! I thought that in Fangirl, Cath wrapped up all the ‘plot holes’. That’s a massive one! And what’s with the flat share? I wasn’t expecting that. Isn’t that a step back?!

Overall I really did enjoy this book. Not as much as Fangirl however – I expected less of Fangirl so it surpassed my expectations and having liked Fangirl so much I expected to like Carry On that much more.
Did you follow that? Good.