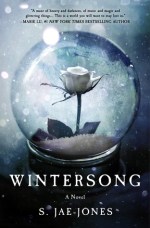 “Once there was a little girl who played her music for a little boy in the wood.
She was small and dark, he was tall and fair, and the two of them made a fancy pair as they danced together,
dancing to the music the little girl heard in her head.”
- Page 9

Beware the goblin men and the wares they sell.

All her life, nineteen-year-old Liesl has heard tales of the beautiful, mysterious Goblin King. He is the Lord of Mischief, the Ruler Underground, and the muse around which her music is composed. Yet, as Liesl helps shoulder the burden of running her family’s inn, her dreams of composition and childish fancies about the Goblin King must be set aside in favor of more practical concerns.

But when her sister Käthe is taken by the goblins, Liesl journeys to their realm to rescue her sister and return her to the world above. The Goblin King agrees to let Käthe go—for a price. The life of a maiden must be given to the land, in accordance with the old laws. A life for a life, he says. Without sacrifice, nothing good can grow. Without death, there can be no rebirth. In exchange for her sister’s freedom, Liesl offers her hand in marriage to the Goblin King. He accepts.

Down in the Underground, Liesl discovers that the Goblin King still inspires her—musically, physically, emotionally. Yet even as her talent blossoms, Liesl’s life is slowly fading away, the price she paid for becoming the Goblin King’s bride. As the two of them grow closer, they must learn just what it is they are each willing to sacrifice: her life, her music, or the end of the world.

One of the reasons I don’t like to read reviews is because they tell me things like “cliff hanger ending” or “I hope number 2 will continue with X’s story, especially after THAT ending!” and it just puts me off, especially with new releases where I can’t get my hands on book 2 right away after.
I saw a comment along these lines while I was reading this book and because of this it took me forever to read this book. It also happened to contain a new cliche I don’t like, so that didn’t work in it’s favour either.

I received this book in the February Illumicrate and it came with a letter from the author. In it she mentioned David Bowie’s Goblin King (The Labyrinth). Having read the letter before reading the book he was all I could think of whenever “Goblin King” was mentioned and because of this I never fell under the Goblin King’s spell and I believe I should have…
So as a side note I now don’t know if I SHOULD be reading these letters first. but what if I miss something important?

What had me really confused is why everyone seemed to have so many names. Different people called other people different things and I felt like there were 3 times as many characters as there actually was.

Lisel suffered a little from what my mother called “Poor Me Syndrome”. She didn’t bring it on herself though, it has to be said. Her father was terrible! He was a massive contributor and he’s missed out on so much.
I didn;t get her sisters motive either – or if it’s explained in the book, I have forgotten it and I’m really not sure what her angle is. I’m pleased her brother is out and that he’s got a new friend. His father wasn’t good for him and while I’m not sure his new mentor is any better, he’s a different kind of worse and his friend will help.

I look forward to what Elizabeth does next. I hope she claims her husband, loudly, before going off on an epic, take no prisoners quest.

I also hope that book 2 continues after THAT ending…