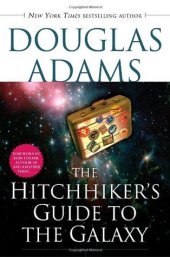 “You know, it’s at times like this,
when I’m trapped in a Vogon airlock with a man from Betelgeuse,
and about to die of asphyxiation in deep space that I really wish I’d listened to what my mother told me when I was young.”
“Why, what did she tell you?”
“I don’t know, I didn’t listen.”

Seconds before Earth is demolished to make way for a galactic freeway, Arthur Dent is plucked off the planet by his friend Ford Prefect, a researcher for the revised edition of The Hitchhiker’s Guide to the Galaxy who, for the last fifteen years, has been posing as an out-of-work actor.

Together, this dynamic pair began a journey through space aided by a galaxyful of fellow travelers: Zaphod Beeblebrox, the two-headed, three-armed, ex-hippie and totally out-to-lunch president of the galaxy; Trillian (formerly Tricia McMillan), Zaphod’s girlfriend, whom Arthur tried to pick up at a cocktail party once upon a time zone; Marvin, a paranoid, brilliant, and chronically depressed robot; and Veet Voojagig, a former graduate student obsessed with the disappearance of all the ballpoint pens he’s bought over the years.

Where are these pens? Why are we born? Why do we die? For all the answers, stick your thumb to the stars

This has been on my TBR for a long time now and having fallen out with the radio completely now, I decided it was time to work on my build up of audio books. This was the obvious first choice – as it’s origins were in radio. I’d been playing with the idea of listening to audio books because I spend so much time in the car some nights and it just seemed a good use of my time.
I’ve also found The Hitchhiker’s Guide to the Galaxy all over the show recently, which was another prompt. Pan Galactic Gargle Blaster mouthwash tabs from Lush (don’t use a whole one at once) and t-shirts from Teeturtle. (yes, I own one.)

There are a few options when it comes to buying The Hitchhikers guide to the Galaxy, one of which is the dramatised radio version, but I went for the unabridged version read by Stephen Fry. You see, he narrates the guide in the film and when you say the title, there a few parts of his narration that spring to mind and I was so very pleased that they were taken directly from the book so that I got to listen to them again. Something very satisfying about that.

I had been wondering if Trillion had been added to the film simply as a love interest because I don’t recall seeing her in the small amount of clips I remember seeing from the TV show. I was pleased to, uh hear that she wasn’t! The point of view gun was though – unless it’s in later books – I liked that!
This was a much shorter book than I was anticipating and it didn’t take me very long to finish it at all – I even had to start book 2 in the middle of the day! (Don’t swap books while driving)

The main problem I have is that there were so many great lines but I couldn’t write them down! Some I was able to find but there was one near the beginning I’m still hoping to locate!

I have to say that I imagined the cast of the film for each character, except Trillion for some reason. Zaphod – aside from being automatically exasperating, was a little harder to imagine though, because he was different, physically. I kept forgetting his second was on his shoulders next to the first! I was also sad that Arthur wasn’t travelling space in his dressing gown and hadn’t been provided with a towel by Ford.