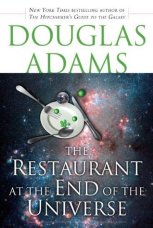 “To summarise: it is a well-known fact that those people who must want to rule people are, ipso facto, those least suited to do it.
To summarise the summary: anyone who is capable of getting themselves made President should on no account be allowed to do the job.”

Facing annihilation at the hands of the warlike Vogons is a curious time to have a craving for tea. It could only happen to the cosmically displaced Arthur Dent and his curious comrades in arms as they hurtle across space powered by pure improbabilityband desperately in search of a place to eat.
Among Arthur’s motley shipmates are Ford Prefect, a longtime friend and expert contributor to the Hitchhiker’s Guide to the Galaxy; Zaphod Beeblebrox, the three-armed, two-headed ex-president of the galaxy; Tricia McMillan, a fellow Earth refugee who’s gone native (her name is Trillian now); and Marvin, the moody android who suffers nothing and no one very gladly. Their destination? The ultimate hot spot for an evening of apocalyptic entertainment and fine dining, where the food (literally) speaks for itself.
Will they make it? The answer: hard to say. But bear in mind that the Hitchhiker’s Guide deleted the term “Future Perfect” from its pages, since it was discovered not to be!
“What’s such fun is how amusing the galaxy looks through Adams’ sardonically silly eyes.”

This was read by Martin Freeman. I found this weird because I was enjoying Stephen Fry and while Martin Freeman IS Arthur Dent, I kept imagining the faces he must have been pulling while doing the voices and it’s just weird. I didn’t do that with Mr Fry, perhaps because I have experience listening to him…(Harry Potter!)

I went into this one with no prior knowledge. A few things were in here from the film which mean’s I’m totally holding out for the point of view gun!
I ended up getting abut half way through and feeling this was more boring than the first, possibly because our fantastic team were split up. Then for some reason something changed. I can’t say the setting got any better, but there was some kind of joke or other, possibly this one; ” A telephone sanitizer? A dead telephone sanitizer?” “Best kind.” “But what’s he doing here?” “Not a lot.” and I thought ‘that’s just my kind of humour’ and I started enjoying it all again. It wasn’t quite as silly as I’d like but I high hopes for the next book.

Zaphod completes his mission in life and I wonder what he’ll do next. locate the others I hope! They’re in a bit of a situation, not in the best company…but it does really leave us in the lurch a bit! Not quite a cliffy, but sort of at a ‘but what next!’ moment at the end there and I have to wait a month before I can get book 3!