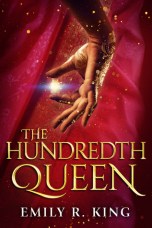 “Let the sky lead you, the land ground you, the fire cleanse you and the water feed you.”
- Page 240 (kindle)

As an orphan ward of the Sisterhood, eighteen-year-old Kalinda is destined for nothing more than a life of seclusion and prayer. Plagued by fevers, she’s an unlikely candidate for even a servant’s position, let alone a courtesan or wife. Her sole dream is to continue living in peace in the Sisterhood’s mountain temple.

But a visit from the tyrant Rajah Tarek disrupts Kalinda’s life. Within hours, she is ripped from the comfort of her home, set on a desert trek, and ordered to fight for her place among the rajah’s ninety-nine wives and numerous courtesans. Her only solace comes in the company of her guard, the stoic but kind Captain Deven Naik.

Faced with the danger of a tournament to the death—and her growing affection for Deven—Kalinda has only one hope for escape, and it lies in an arcane, forbidden power buried within her.

In Emily R. King’s thrilling fantasy debut, an orphan girl blossoms into a warrior, summoning courage and confidence in her fearless quest to upend tradition, overthrow an empire, and reclaim her life as her own.

Amazon offered this to me early for 99p. I’ve never found anything on their pre-release lists before so I was super excited! I do want to get a hard copy of the book at some point too because I like to physically own books I like.

I enjoyed this book and while it wasn’t one-more-chaptering me, it was on my mind when I wasn’t reading it. If you wanted to be specific this could be called ‘Middle Eastern Fantasy’, which is a sub genre I like because I know little to nothing about that part of the world and I like learning more. And yes, I know it’s fiction but it’s based on those cultures so some elements bleed through.
I think my favourite part is the lost history of the Brotherhood and the Sisterhood. I hope we learn more about that in the future. Actually there’s a whole wealth of lost information in this world and I’m looking forward to re-reading this book before I read book two and picking up on all the little bits I missed because I didn’t know about them. I do love books that tell you things before you know they’re important! It makes re-reads so much more fun – it’s also half the reason I re-read! The other half is because…I can never remember characters or events…

I felt like there were a few bits missing from the plot, a few sort of not-gaps that needed a little more smoothing. Not enough time or explanation or something… Maybe they were edited out or maybe I just didn’t get it, who can say? Other than that I found the whole story rather clever and I really enjoyed what we learnt of the world so far.

I love how Kalinda got herself through each situation she found herself in, it was well done and a good way around what I believe is called the Mary-Sue trope, where the character is perfect at everything? The main reason she was chosen though is kind of creepy. Not exactly the actual choice, but the reason behind why it ended up being made. So close!
She wasn’t given much room to grow but she certainly did. I hope she continues to grow in the next book. The title bodes well, we’re just going to ignore all love-triangle references and hope like blazes it’s really hardly anything at all and simply mentioned in the blurb because for some reason publishers STILL think we want that stuff.
SPOILER ALERT: We don’t…