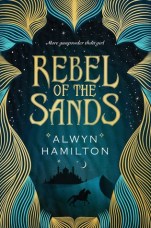 “Tell me that and we’ll go.
Right now.
Save ourselves and leave this place to burn.
Tell me that’s how you want your story to go and we’ll write it straight across the sand.”

Oh, I love re-reading books that have hidden little bits throughout that only make sense after the end reveal. These little things are specifically there FOR re-reads and they’re so clever. If you have a good enough memory and a sharp enough mind you can think back and spot them all, but I never do, I only find them when I read them again.
Like the quote I have for this post. At the end of the book it’s clear why he keeps saying things like this too her and it’s obvious why things turn out the way they do too. It adds a layer of meaning and gives you something new to find.

When I first read this book, I wasn’t expecting the outcome towards the end. I was expecting your average adventure story across the desert to a rebellion against a cruel Ruler. Boy was I surprised! Pleasantly so, as a supernatural element generally improves how I feel about a book.

I hope things work out for Amani and her family. Their blendability has certainly been a disadvantage for them, everyone else has had time to come to terms with it. I’m trying to not give the game away, because I don’t think it’s mentioned in the blurb of book 2! But if you don’t know what I’m talking about, don’t read tomorrows review until you do!

My original review (copied below) can be found HERE.

I originally chose the same quote that’s in the blurb – only it’s a little different in the story. But I changed it because otherwise the blurb would be tiny if I took it out! There’s a reason for that though. This is one of those gentle stories whose BOOM! is kind of a major plot point…and all these little tiny things that you never realised were there suddenly all fit together and make perfect sense. As debut novels go, this is ‘a corker’.

I read this book in a day and I enjoyed it. Amani’s a strong character in a country that treats women like objects. She’s burning to get out of her little town because she’s refusing to accept the life before her. To be honest, no one can blame her, not even her best friend! She seems pretty good at whatever she sets her mind to and finally, finally with Jin’s help, she gets out of Dustwalk – not a moment too soon. He’s a foreigner on a mission, and despite trying to loose each other along the way, they inexplicably find their lives woven together as she runs away and he runs towards.

I liked Amani. I liked Jin. I liked Amani and Jin! I can’t wait to read more! In fact, I can’t wait to read this one again, because something happens which leaves you amazed and in need to go back and check everything. I will also hopefully pay more attention to the others next time too, because I was too caught up in Amani to worry about the others. Glad I don’t have to live here though, too much sand for me!

I have to say, I nearly didn’t read this right now. It’s 1 of a trilogy and sometimes they like to have a bit of a cliffy going on at the end of a book and sometimes I’m just not in the mood for it. However, I spotted a review that said it was a balance between a happy stop and wanting to know more. That kind of ending I can deal with, so I gave it a go and I have to agree! There’s no cliffy, but by no means does it wrap everything up – but then there are two other books, I wouldn’t expect it to.

One question I DO have though, is about her promise in the church. You’ll get what I mean when you read this, because you’ll be reading it, I’m sure.

A fantastic start to a new series – for fans of an Eastern-desert feeling book like Vessel and Rae Carson’s Fire and Thorns trilogy.