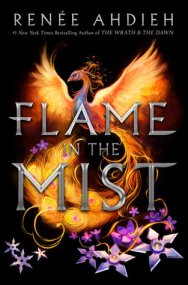 “I believe the stars align so that souls can find one another.
Whether they are meant to be souls in love or souls in life remains to be seen.”
- Page 198

The only daughter of a prominent samurai, Mariko has always known she’d been raised for one purpose and one purpose only: to marry. Never mind her cunning, which rivals that of her twin brother, Kenshin, or her skills as an accomplished alchemist. Since Mariko was not born a boy, her fate was sealed the moment she drew her first breath.

So, at just seventeen years old, Mariko is sent to the imperial palace to meet her betrothed, a man she did not choose, for the very first time. But the journey is cut short when Mariko’s convoy is viciously attacked by the Black Clan, a dangerous group of bandits who’ve been hired to kill Mariko before she reaches the palace.

The lone survivor, Mariko narrowly escapes to the woods, where she plots her revenge. Dressed as a peasant boy, she sets out to infiltrate the Black Clan and hunt down those responsible for the target on her back. Once she’s within their ranks, though, Mariko finds for the first time she’s appreciated for her intellect and abilities. She even finds herself falling in love—a love that will force her to question everything she’s ever known about her family, her purpose, and her deepest desires.

I received this book in both the May Fairyloot box and the Unicorn Crate. Both came with candles, Fairyloot had two options Flame (Mariko) and Mist (Ōkami) I received Mist and once I realised it was meant to smell like him I made sure to smell it often as it smells so nice. The one from the Unicorn crate is called Okami but it smells like Christmas which is unfortunate, too much cinnamon…

I really enjoyed this book! Possibly not as much as her other series, this seems a vaguer world and Mariko is no Shazi. Or she wasn’t. She might be on par with her now, which is an idea that makes me even more excited for book two! This is why I don’t like reading books as soon as they come out, dang it, the rest of the series is too far away.

I don’t know how many books will be in this series – I’m hoping two because I need the HEA…but I have no idea where we’re going from here so it could be longer. So many mysterious elements are at work here – the world is presented to us as feudal Japan but magic is creeping in and while we’re given some back story, there’s got to be more going on than we know and there’s just too much unknown for me to work out a possible endgame and I’m actually ok with this.

Ōkami was by far my favourite character even though there’s so much mystery still around him. I pretty much liked him above all the others almost from the start. I liked how amused he was by Mariko, almost despite himself and I liked how they sparred. I also liked his confused conversation with his friend, which is even funnier after the end. I’m looking forward to learning more about him.

The royal family is a mess and I really don’t think the boys see it which is a problem. Two selfish women are about to battle it out and I really don’t know which I’d like to win. Neither really, to be honest. It adds another layer of complex-ness to the whole affair. There was one good thing that came out of that though, but I’m so confused about what the possible future plans could be. There is definitely a plan though and it seems to involve all the main players. I’m betting some heartbreak is going to go on too. But I know that Ōkami has something hidden up his sleeve that no one by Mariko knows about and I know that she’s well on the way to being able to do deal with the task at hand, if not already.

Definitely for fans of Mulan, Tamora Pierce and The Wrath and the Dawn series!