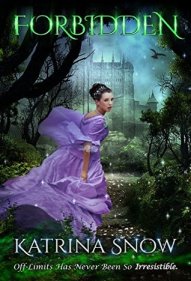 Thank you to Netgalley and the Publisher for the chance to read this book in exchange for an honest review.
Published: 11th November 2015

Off-limits has never been so irresistible…

Lady Katherine Durant has perfected the art of hiding her Gifts—a valuable skill in a land where any hint of sorcery could lead to the burning stake. But, hiding her Gifts isn’t the same as not using them, and that troublesome difference has led to capture each time she’s run from her uncle.

Now, using a newly-discovered spell, she binds her powers and flees again—this time for her life. Unfortunately, her plan to hide as a maid in a distant kingdom goes awry when she unwittingly gets entered into a festival competition for the hand of a prince—a man with a wicked kiss and a sense of adventure that rivals her own.

All she’s ever hoped for is a quiet existence as a servant, never imagining she could find laughter and belonging and love. And now the mischievous prince has her dreaming of all those things.

With a bounty on her head, sorcerers closing in, and a prince threatening to steal her heart, could it finally be time to stop running? Time to trust? Time to love?

This book was so entertaining! Some of it was predictable, transitions were barely there, a few points seem to have been missing (Or I just read through too fast and missed them…) and there was just a little something about the writing that wasn’t my favourite, but despite all that I gave it 4.5 Voodoos because I couldn’t put it down! I read way past my bedtime so that I could get to the end because I couldn’t wait. It was funny and adorable and it really didn’t feel like the characters fell in love too fast, even though it turns out they knew each other between a week and a month I believe?
Even though the language seemed simple sometimes this is no children’s book, I’d even go as far as to class it as NA – just that little step up from YA as it holds sex scenes and intimate moments.

I loved this world and I’m looking forward to finding out more about it as the characters do. In this world a lot of the knowledge of Magik has been lost due to ignorance and persecution. There seems to be two types of magic, one that you can be born with, called Gifts, and another that you can control with a talisman. There might also be a third, but then again, it might simply be an extension of the first, we don’t know yet but I certainly hope we find out soon. The genie idea was pretty terrifying to be honest with you, can it happen to anyone?! Are there special requirements? I hope so, otherwise that would suck!

This was a long book at 436 pages (according to goodreads) but I feel that it could have done with some fleshing out. A few areas needed a little more explanation and I’m not just talking about the major plot points that we’ll no doubt get to at another point in the series. The story didn’t drag at all and I think it could have easily taken the extra flashing to just smooth it out a little.

I really liked the chemistry between Kate and Bregovi. It started of as a game and really didn’t feel like insta-love. They challenged each other and worked well together and once they know what’s going on I’m pretty sure they’ll conquer all sorts of trouble together. I liked the…accidental event at the end that they then later did on purpose and I’m looking forward to them investigating that further, though I understand that the next book is likely to pay more attention to Sylvan – or possibly a princess. I’m not a fan of sylvan, I have no empathy for him right now so I’m not so keen if it’s going to be all about him. But I didn’t quite realise how ‘old’ this book is, any news on book 2?!?