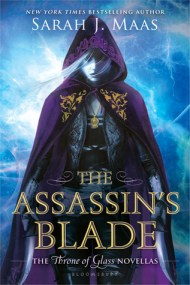 “You want to hear something ridiculous? Whenever I’m scared out of my wits, I tell myself: ‘ My name is Sam Courtland…and I will not be afraid.’ I’ve been doing it for years.”
-Page 372

Celaena Sardothien is Adarlan’s most feared assassin. As part of the Assassin’s Guild, her allegiance is to her master, Arobynn Hamel, yet Celaena listens to no one and trusts only her fellow killer-for-hire, Sam. In these action-packed novellas – together in one edition for the first time – Celaena embarks on five daring missions. They take her from remote islands to hostile deserts, where she fights to liberate slaves and seeks to avenge the tyrannous. But she is acting against Arobynn’s orders and could suffer an unimaginable punishment for such treachery. Will Celaena ever be truly free? Explore the dark underworld of this kick-ass heroine to find out.

I found her SO annoying in this one. So arrogant and dislikeable.  In fact, while reading it, I disliked her so much I was surprised I’d loved these novellas the first time I read them. Her general attitude stank and she was awful to Sam, how does he like her?!

This was a new one! At first I thought her attitude change was because this was written later, but she actually learnt something from the incident in the last one which was nice. I’m wondering if her friend in this will return in the novels because she was actually mentioned in the next one, which I think was written first.

Her attitude change is present in this and this is where I started to get invested in this world – just like before. She’s learning about another part of the world she’s not really seen before. I wonder why she didn’t go back here later. It doesn’t seem to have been something that was considered or talked about which is a little confusing.

Y’know, Sam’s WHY is never covered. I think that a good solid why would have sold us on her a lot more. It better not have just been the obvious. Even SHE has to question it….
I hope that it’s something we can’t know yet and at some point we get a big flashing arrow that says THIS IS SAM’S WHY!!!

And this is the one that broke my heart.
I’d somewhat convinced myself that what happens could have actually been a feint by Arobynn, that is wasn’t really true and that it would prove to be wrong later. No such luck! It was shown in heart breaking detail.
I wonder if any of the other characters will ever be this good.
I have little hope.

I always felt she and Sam weren’t quite as skilled as they should have been for the best assassins in the guild! There was a lot more bragging and a lot less skill than I thought should be required. I originally read these before Throne of Glass – they came out first and we were recommended to read them first too. I went into Throne of Glass full of “The Assassin and the Empire” where as it was more “The Assassin and The Pirate Lord”. After the events of Empire, the love triangle forming in Glass never sat well with me. I was also annoyed that she didn’t deal with who she needed to deal with – I was under the impression that she knew who that was, but apparently not! But never mind. I hope she finds out quickly I want her to get her revenge. I want him to regret it all.
Arsebutt.

This time around – having accidentally come across various forms of spoiler – I noticed things that I know are going to be important further down the line. That I found VERY clever and while I don’t quite understand them, I’m looking forward to doing so later.