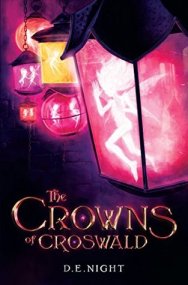 Thank you to Netgalley and the Publisher for the chance to read this book in exchange for an honest review.
Publish Date: 21st July 2017

In Croswald, the only thing more powerful than dark magic is one secret…

For sixteen years Ivy Lovely has been hidden behind an enchanted boundary that separates the mundane from the magical. When Ivy crosses the border, her powers awaken. Curiosity leads her crashing through a series of adventures at the Halls of Ivy, a school where students learn to master their magical blood and the power of Croswald’s mysterious gems. When Ivy s magic and her life is threatened by the Dark Queen, she scrambles to unearth her history and save Croswald before the truth is swept away forever.

I’d seen this book all over the place and it looked so pretty I couldn’t wait to read it! I was really excited to find it on Netgalley and requested it straight away. Unfortunately this book and I did not get on.

I really wanted to like this book – I’d heard fantastic things! It’s even been compared to Harry Potter.
The idea of this book was fantastic, but the writing was weird. Not good weird. It felt like it was trying for quirky, but tried too heard and got wooden and stilted instead. It does feel heavily influenced by Harry Potter, but it lacks the flow and effortlessness that Harry Potter has.

I found this in the Teens & YA section of Netgalley and as Ivy is ‘fifteen-going-on-sixteen’ on the first page, I assumed it fell under the YA portion. However it also can be found under ‘middle-grade’ on Netgalley – which translates to Key-stage 2/3 or roughly 8-12 year olds. This makes more sense for me, it was certainly a far less complex story than you’d expect to find for an older audience.
Having said that, I did spend a lot of time confused as nothing seemed to flow together well and while the book was padded out with needless double descriptions, the time wasn’t taken to fully describe this new and magical world beyond the top surface.

This story isn’t set in contemporary times, but rather in the time of castles. It’s set in another world too, I think – or perhaps a forgotten part of this one. Magical creatures are found and used all over – though we don’t end up meeting many of them.
Those with magic, either in a family stone or in their blood go off to school at 16 to learn about it. If it’s in your blood you become a Scrivener, a person who goes around discovering and recording everything with their magical quills – not wands. I didn’t quite understand the crowns with the stones – it seemed that it gave the Royals one magical ability. I’m not sure why the two very different types were together in lessons, unless they were also able to Scrivener things too? Not sure if it’s something I missed.

I struggled to read this book. I persisted because I really wanted to know what the end would be. I couldn’t quite work out where everything was leading to. Possibly because what I thought was coming was too obviously coming. While what I was thinking wasn’t quite true, it still happened. Which didn’t make a lot of sense. If she was hidden away, why wasn’t her name changed? I assumed it was, but if it wasn’t then why did no-one recognise it? She also spent a year at this magic school, with extra lessons but she didn’t really seem to develop much as a character either which was sad. None of the other characters were very developed either, but if the book is for 8 – 12 year olds I guess it needs to be less complex.

I’d have loved more indepth information about the wandering family! That would be a fantastic story to read and while I want to know more about that tiny portion of this world, I won’t be continuing this series.