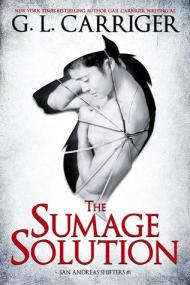 “She was sipping something that smelled of fish and lawn clippings.
Probably clam juice with wheatgrass.
There was no accounting for kelpie taste buds – odd things happened when horses went swimming.”
- 90%

Can a gentle werewolf heal the heart of a smart-mouthed mage?

NYT bestseller Gail Carriger, writing as G. L. Carriger, presents an offbeat gay romance in which a sexy werewolf with a white knight complex meets a bad boy mage with an attitude problem. Sparks (and other things) fly.

Max fails everything – magic, relationships, life. So he works for DURPS (the DMV for supernatural creatures) as a sumage, cleaning up other mages’ messes. The job sucks and he’s in no mood to cope with redneck biker werewolves. Unfortunately, there’s something oddly appealing about the huge, muscled Beta visiting his office for processing.

Bryan AKA Biff (yeah, he knows) is gay but he’s not out. There’s a good chance Max might be reason enough to leave the closet, if he can only get the man to go on a date. Everyone knows werewolves hate mages, but Bryan is determined to prove everyone wrong, even the mage in question.

I liked this story.
( I also liked the novella but I waited to long with that for a review. I do recommend reading it first)

Biff was adorable. Not your average werewolf – not even your average werewolf in this world, he’s big and strong and calm and caring. He was by far my favourite character. His pack is unusual in that their alpha is smaller and smarter and gay. One thing that I never get though is when in these stories the gay wolves are kicked out of the packs – because some wolves actually are gay so it’s more the human thing to kick them out…

This is set in the same world as her other stories and I love that. Yes you read that right. This is set in the now of the world that Parasol Protectorate etc is set in! I had a little wonder but a throw away line confirmed it. Something about excess soul. Keep an eye out! It adds another dimension to what’s going on which is just fantastic. Things aren’t working quite the way they should be anymore and it’s fascinating to see the changes. Of course you don’t need to have read any of the others, but it’s just going to be so much more fun if you have.

Biff was also heartbreaking. His decision to do exactly what it was the Max wanted was so sad and even though I had faith that it would all work out – because that was what we were there for – I still cried at one point!

Alec seemed a little brat-ish in this, but then as a new alpha I can forgive him. He pulled through for his brother at the end there though, but I’d have loved to have seen more at the end, more scenes where he was welcoming Max to the pack officially.

Max was a little meh for me. I know he’s had a bad time of it, but he just seemed…I don’t know. I couldn’t relate to his choices. It was very much cutting his nose off to spite his face! Honestly the poor nose didn’t deserve it and I’d much rather be whole than hurting.

I really want to learn more about this modern age of Alexia Tarabotti’s world. I really want to know what’s going on with Colin and how exactly that’s going to work, I’m also interested in all these other species I don’t think we’ve had before! different shifters and mages and things.
And I also kinda hope the whole pack doesn’t turn out gay. Sometimes it happens in stories like this and while I understand the need for safe spaces, I totally want some hetrosexual wolves living and loving their gay brothers.

Y’know what? I also want some familiar faces turning up unexpectedly. And where did the vampires go?!