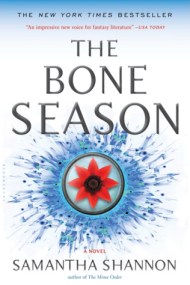 “That single word sent a tremor through my skin.
I thought of what oil and fire did together: exploded.”
-Page 373

19-year-old Paige is working in the criminal underworld of Scion London.
Her job: to scout for information by breaking into people’s minds.
It is raining the day her life changes for ever.
Attacked, drugged and kidnapped. She is assigned to Warden, a Rephaite.
He is her master. Her trainer. Her natural enemy.
But if Paige wants to regain her freedom she must allow herself to be nurtured in this prison where she is meant to die.

I switched editions on my goodreads page so I can’t actually tell when I bought this book, but it’s been on my shelves for some time. I pulled it out when I realised I had a copy and that Samantha Shannon was going to be at YALC. I sort of tried to read it for then but as her signing was at the same time as Alison Goodman’s I wasn’t sure that I’d make it to hers. I’m so glad I took it with me though, when I got there I had half a chapter left and I ended up buying a matching pair of the first two books and getting them signed. I think I waited too long to finish that last half chapter though because it had lost it’s urgency when I finally did.

I had assumed that this was to be a trilogy, but it seems as though there’s going to be 7 books in the series and I really don’t know how I feel about this. The first part of the book was pleasant enough, it just didn’t grab me too much. I think it was about 3/4 of the way through when I really got into it – conveniently on the same day I had to actually do stuff….

This is set in alternate England and having just read The Sumage Solution, which is connected to The Parasol Protectorate, I kept getting confused with which storyline I was in because they blended rather well which was weird.

There were so many different Voyants that I had no idea what most of them were. I can understand why we weren’t told that much though – they do say show not tell – and too much of the book spent on explanation would have been boring. Clearly this will not be as simple a story as I first assumed – since there’s a minimum of another 6 books – but I don’t want to wait that long for certain, hopefully not impossible HEA’s.
We focus on a specific group of Voyants and one in particular. I’m assuming that we’ll be following her around as she finds out exactly what’s going on.

I loved Samantha’s solution to the required love triangle! So very clever. And I really am very curious about what exactly a Rephaite is.
But now I don’t know what to do, do I read book 2 now, and 3 when it’s paperback? Or do I wait for all 7 to be out?! Ugh!