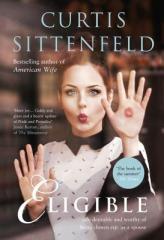 Thank you to Netgalley and the Publisher for the chance to read this book in exchange for an honest review.
Publish Date: 21st April 2016

This version of the Bennet family and Mr. Darcy is one that you have and haven’t met before: Liz is a magazine writer in her late thirties who, like her yoga instructor older sister, Jane, lives in New York City. When their father has a health scare, they return to their childhood home in Cincinnati to help and discover that the sprawling Tudor they grew up in is crumbling and the family is in disarray.

Youngest sisters Kitty and Lydia are too busy with their CrossFit workouts and Paleo diets to get jobs. Mary, the middle sister, is earning her third online master’s degree and barely leaves her room, except for those mysterious Tuesday-night outings she won’t discuss. And Mrs. Bennet has one thing on her mind: how to marry off her daughters, especially as Jane’s fortieth birthday fast approaches.

Enter Chip Bingley, a handsome new-in-town doctor who recently appeared on the juggernaut reality TV dating show Eligible. At a Fourth of July barbecue, Chip takes an immediate interest in Jane, but Chip’s friend, neurosurgeon Fitzwilliam Darcy, reveals himself to Liz to be much less charming. . . . And yet, first impressions can be deceiving.

I have mixed feelings about this book. At times it entertained me but at others it frustrated me. I considered putting it down quite a few times and I’m really not sure the ending was worth it. the amount of chapters freaked me out a little, 181! Some were only a paragraph however.

I loved how well hidden in plain sight some of the characters were!
Jasper Wick was a Wickham replacement and Kathy de Bourgh was obviously Catherine de Bourgh but it took me WAY too long to realise this….

The story was full of diverse characters which was lovely. Not all of them were prominent but that they were there was good.

I also liked how some of the storylines were changed, I didn’t like the others however.
Jasper Wick was a bit of an eh character. He was in the story a lot even if he wasn’t physically there.
Kathy de Bourgh was fantastic however. I agree whole heartedly with her sentiment that there’s nothing wrong with looking after someone and being looked after by someone in return especially if the levels of devotion are somewhat similar. This is, in my opinion, end game and books that have female characters turning down the men they love because they “don’t need a man!” frustrate and annoy me because this is not strong or feminist, it’s isolating. If she didn’t love him or if he didn’t love her (as much) or if he was horrid or abusive then that’s different of course, but so far my experience has just been simply because.

I also didn’t like how different some of the characters were to their original counterparts.
Mr Darcy was almost exactly the same, slightly less socially awkward which took a little of his charm away for me.
Lizzie was called Liz which I just found odd, I think it made it harder for me to quite get into it though I’m not exactly sure why that would be. Maybe because it made her almost seem like someone else? She was also more disagreeable I thought! They had more interaction, understandably as there are fewer restrictions in today’s society, but this extra time together didn’t speed up her realisation like I feel it should have but just gave her more time to make him dislike her – which he obviously didn’t. (she also stole some of his lines!)
I’m not sure why Bingley kept crying, but ok and Lydia was almost 90% different. Almost. Not nearly as oblivious to everything.
Mrs Bennet also seemed sillier. Originally she was well aware of the financial situation she was in, while her modern day counterpart was quite unaware. Her habits seemed realistic however, having seen programmes where women do that sort of thing!

A few other things I liked though were how it was noted that as Mary was plain she was allowed to be intelligent in a way her sister wasn’t I’m not sure if it was meant to be noted in a similar way but it seemed as cassually prominant that Mrs Bennet cared for Mr Collins (a man) feelings of those of her daughter (a woman). how often do is women hear “Just give him a chance, you never know!”. I’m horrified to admit that I’m likely guilty of not only succumbing to that phrase but also saying it myself.
And a toxic relationship, once recognised was terminated forever, with the general attitude of, I don’t care if you miss me you should have treated me better. YES. Now you behave better too!