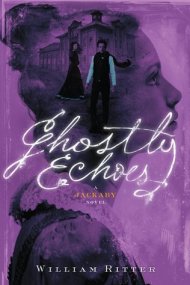 “If you ever see HER again, you will remember that monsters pick on the weak and the harmless because it is the monsters who are afraid.
And they are right to be afraid.”
- Page 73

Jenny Cavanaugh, the ghostly lady of 926 Augur Lane, has enlisted the investigative services of her fellow residents to solve a decade-old murder—her own. Abigail Rook and her eccentric employer, Detective R. F. Jackaby, dive into the cold case, starting with a search for Jenny’s fiancé, who went missing the night she died. But when a new, gruesome murder closely mirrors the events of ten years prior, Abigail and Jackaby realise that Jenny’s case isn’t so cold after all, and her killer may be far more dangerous than they suspected.

Mainly this book is about Jenny – their resident ghost – and her hiring them to find out who murdered her and where her fiance went. It continues on from the other two books, pretty much right afterwards. I didn’t re-read the first two books before reading this because I felt it was a suitably uncompleted enough story line that I didn’t need to. There was one thing that I’d either forgotten about the build up for, missed or was just dropped in there, but I couldn’t really say because, as I said, I didn’t re-read! Having just thought about it though, if it wasn’t given a build up, maybe it was MEANT to be obvious? I’m assuming I forgot something, so it’s ok.

I read this in a day and I wasn’t really super dazzled. I don’t know if this is because I wasn’t reading it as fast as I felt I should be or if it was because it was a teen book not a YA book or because I haven’t binge read in a while. I started to crochet at the same time and really breezed through the second half though so that’s great!

It’s written just as well as the others, though possibly fewer epic lines in this – things are getting serious! The plot was good and it started to link everything from the other two books in really cleverly and I can’t wait to read the last book!