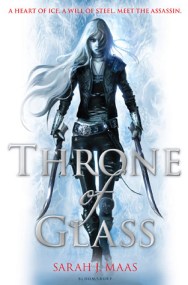 In the dark, filthy salt mines of Endovier, an eighteen-year-old girl is serving a life sentence. She is a trained assassin, the best of her kind, but she made a fatal mistake. She got caught.

Young Captain Westfall offers her a deal: her freedom in return for one huge sacrifice. Celaena must represent the prince in a to-the-death tournament—fighting the most gifted thieves and assassins in the land. Live or die, Celaena will be free. Win or lose, she is about to discover her true destiny. But will her assassin’s heart be melted?

How is it I forgot all the best bits?! When looking at my friends colouring book for this series (I only looked at pages pertaining to the first book – I’ve crashed head first into too many spoilers as it is…) I was reminded vaguely of a few things but I couldn’t even remember how they fit into the story!
Ok, so it has been 5 years, but I really didn’t think that my memory was that bad! Especially as I though them to be the best bits of the whole affair too.

A few things bothered me:
The attraction triangle – previously so soon after Sam, but it’s attraction she can be attracted to whomever, whenever. It bothered me less this time.
Her lack of chill – but there is a massive hint that this is for a reason, so I guess we’ll see, maybe I’ll for give her.
Her lack of espionage skill – at one point she wished she hadn’t worn the dress she was wearing, I can sort of understand it, she’s a big bad assassin and wanted to be seen as such, but she was in a room full of blustery men, being in a dress meant they underestimated her and that should have been a major part of her training – to be underestimated.

By the end of the book though I was raring to get into book two, so there’s that. I think that I enjoyed more of it now than the first time I read it. I’ve managed to shed some of the expectations I didn’t realise I’d been thinking women should sick to and now, characters that really don’t are far more exciting.
Of course she can be a bloody menace with a blade AND enjoy pretty things and elegant dresses, why not?

Being betrayed which resulted in being caught, Celaena Sardothien, the 17 year old, continent renowned assassin, surfaces from her fog of grief long enough to issue a challenge to the king, resulting in her being shipped to a death camp, rather than the gallows.
A year later, despite special instructions as to her keep, she’s still alive and not even remotely broken. And the prince has a proposition for her. If she represents him in a tournament designed by his father to find the ‘Kings Champion’ from a mix of thieves, assassins and dishonourably dismissed soldiers, each sponsored by a council member, and wins, she’ll serve the king for 4 years, receiving an obscene salary then be granted her freedom. She’s a guaranteed win, partly why the prince travelled so to track her down, despite being out of shape, especially as she’s determined to win something she’s never had before. The freedom to make her own choices, to stop killing and move far, far away from the man who conquered her country and wiped out so many.
Of course, things are never that simple.
When Champions start dying in a terrible way, she’ll need all her abilities to work out why. And to make sure she’s not next.

I really enjoyed this book, despite being worried I wouldn’t (after reading some reviews)
I have a theory as to who she is/was, only I’m not sharing, cause I could be WAY off. The hints were just this subtle of subtle and soooo what I’d do!

Reviews I read prior to reading (so stupid, don’t do it again!!!) condemned her for being arrogant and so forth.
Well, to be that renowned at 16 (when we first meet her in novella 0.1) for an impressive skill set, I think she deserves to be. But despite being so skilled she’s still a rather closeted and slight young lady. Besides, she cant win all the time! And it’s refreshing not to have a ‘perfect’ lead.

A romance was also mentioned. And criticised. I thought, not so soon after 0.4!!! But, well…it is over a year later. I feel ‘romance’ is too strong a word, and Triangle shapes are involved. Though, not in annoying manner, I was impressed!! But I wonder how much of the lack of annoyance was because I peaked at the end…. >.< but it works out well in the end, I feel. The future possibilities for all of them are good.

I also liked her friend, the princess Nehemia. In a time and land where beauty was the most sort after commodity, it’s nice to have female characters who use that to their advantage, while being so much more than they’re perceived. That is clever use of your assets.

And every time she said to herself “[I am Celaena Sardothien.] I am not afraid.” it broke my heart. (please read novella’s for clarification)
There’s great foundation here for a truly fantastic adventure and I can’t wait for the next part!

As to her revenge, little mention of it. But she better be going to get it. That is not something someone like Celaena would forget.