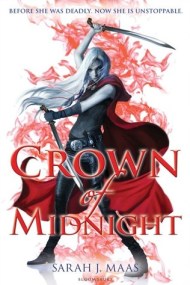 “And what sort of work do you do for my uncle?”
“I bury the kings opponents where nobody will ever find them.”
- Page 28

Crowned by Evil.
Bound by Duty.
Divided by Love.

Celaena Sardothien, royal assassin, is the King of Adarlan’s deadliest weapon. She must win her freedom through his enemies’ blood – but she cannot bear to kill for the crown. And every death Celaena fakes, every lie she tells, put those she loves at risk.

Torn between her two protectors – a captain and a prince – and battling a dark force far greater than the king, Celaena must decide what she will fight for: her liberty, her heart or the fate of a kingdom…

I waited this long to get to book 2 because I was told in 2013 that after being resolved in book 1 the love triangle got WORSE in this one. But I’ve pre-ordered the Mark The Page Tower of Dawn box so I thought it was time to read the series…
It was NOT true! The love triangle did not happen! Obviously she’s still attracted to the other guy and misses his friendship but that’s not an issue. Something devastating happens though and I cried. Almost as much as I did for Sam, but for different reasons.

Speaking of Sam, he’s mentioned far more in this book and I’m so pleased. I loved Sam and I was so sad he wasn’t mentioned in the first book too much. (this adds to my wondering that the novellas were written after the first novel, even though Sarah told us to read them first!) I you haven’t read the novellas, don’t save yourself the heartbreak! They really are good! And not only do you learn who Sam was, but you pick up little bits of information. Some of the “she was once told of this event” moments are from the novellas.

I liked her a lot more in this book. She seemed less annoying by far – but I’m not sure if this is because we learn the why of her. We learn about her past and WHO she is as well as reasons for the way she acts the way she does. Her next step should be something pretty fantastic but she’s still got so much to do.

I still like Chaol most. Poor poor Chaol. He’s going to have to step up his game. The end was a little strange, it kind of just stopped. I guess to mirror how he felt?
I also feel sorry for Dorian more in this too. I didn’t in the first one, I didn’t like him in the first one. He’s growing on me now. These three just really need to sit down and have a nice long session of spill the beans. Not only would they all feel better, but I’m pretty sure they’ll change the world. Though from what I gather, we need to collect a few more characters first?
(How long is this series anyway?)

Throne of Glass was the story of an assassin, this is the story of her world and I look forward to what she’s going to do now that she’s accepted who she is and what she needs to do.