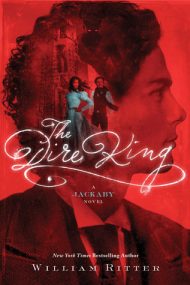 Thank you to Netgalley and the Publisher for the chance to read this book in exchange for an honest review.
Publish Date: 22nd August 2017

The thrilling conclusion to the New York Times best-selling series the Chicago Tribune called “Sherlock Holmes crossed with Buffy the Vampire Slayer” sends the eccentric detective and his indispensable assistant into the heart of a war between magical worlds.

The fate of the world is in the hands of detective of the supernatural R. F. Jackaby and his intrepid assistant, Abigail Rook. An evil king is turning ancient tensions into modern strife, using a blend of magic and technology to push Earth and the Otherworld into a mortal competition. Jackaby and Abigail are caught in the middle as they continue to solve the daily mysteries of New Fiddleham, New England — like who’s created the rend between the worlds, how to close it, and why zombies are appearing around town. At the same time, the romance between Abigail and the shape-shifting police detective Charlie Cane deepens, and Jackaby’s resistance to his feelings for 926 Augur Lane’s ghostly lady, Jenny, begins to give way. Before the four can think about their own futures, they will have to defeat an evil that wants to destroy the future altogether.

The epic conclusion to the New York Times best-selling Jackaby series features sly humour and a quirky cast of unforgettable characters as they face off against their most dangerous, bone-chilling foe ever.

As the last book in the series I expected this to be epic. Which it wasn’t, until it was.
My absolute favourite thing about this book was all its clever little hints, all aligning up to make…absolutely nothing.
Sounds silly, right? But while I was merrily reading along thinking “that fact there has to mean that THIS will happen which means that, from that fact there, that THIS will happen right after.” as you do, but while I was doing that something else entirely happened which took me rather by surprise.
I really enjoyed it actually!

It’s hard to pick a favourite character from all of these guys because so many of them are amazing, but I’m going to have to say mine is probably Miss Rook.
Charlie was adorable, but we really didn’t have enough of him and while Jackaby was fantastic, we were being told the story by Abigail and it’s with her we see the biggest change over all. Plus her attitude is just a win – especially in this book.

Everything circles back and loops together nicely. There is one thing I didn’t get the answer to in this book, though – just a little matter of how long – which is a little annoying, other than that I think that everything was mostly wrapped up nicely.
Except the ending. I didn’t enjoy the ending.
Yes, I know, broken record, blah blah, whatever. But when you read this you’ll see what I mean! [FYI: I'm not a fan of open endings and this is a dozy!] if this wasn’t the ‘thrilling conclusion’ I’d even say this was a cliff hanger ending!

What I want to know is if this is The End, or if we’ll get to follow someone else around in a whole new series. There are a few new developments I can stand being explored further – then we’d get the added bonus of seeing all the things that happened next!

Most importantly, what about Douglas?!?

This series feels like it’s aimed at a younger reader, with the hope that an older one would also enjoy the journey. While not so much of a complex story as something like Harry Potter, it most certainly does not patronise the reader like some other books I’ve read.
It has the mystery of Sherlock, the monsters of Buffy and the humour of Doctor Who. So really, what are you waiting for?