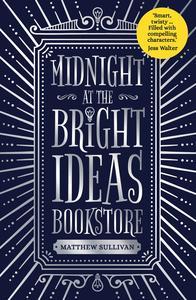 When a bookshop patron commits suicide, it’s his favourite store clerk who must unravel the puzzle he left behind in this fiendishly clever debut novel.

Lydia Smith lives her life hiding in plain sight. A clerk at the Bright Ideas Bookstore, she keeps a meticulously crafted existence among her beloved books, eccentric colleagues, and the BookFrogs—the lost and lonely regulars who spend every day marauding the store’s overwhelmed shelves.

But when Joey Molina, a young, beguiling BookFrog, kills himself in the bookstore, Lydia’s life comes unglued. Always Joey’s favorite bookseller, Lydia has inherited his meager worldly possessions. Trinkets and books; the detritus of a lonely man. But when Lydia flips through his books she finds them defaced in ways both disturbing and inexplicable. They reveal the psyche of a young man on the verge of an emotional reckoning. And they seem to contain a hidden message. What did Joey know? And what does it have to do with Lydia?

As Lydia untangles the mystery of Joey’s suicide, she unearths a long-buried memory from her own violent childhood. Details from that one bloody night begin to circle back. Her distant father returns to the fold, along with an obsessive local cop, and the Hammerman, a murderer who came into Lydia’s life long ago and, as she soon discovers, never completely left. Bedazzling, addictive and wildly clever, Midnight at the Bright Ideas Bookstore is a heart-pounding mystery that perfectly captures the intellect and eccentricity of the bookstore milieu.

I swear the emails I get have totally different blurbs than the website does! Just a little confusing…

This was a sad book. Not ball your eyes out sad, but still devastating. Poor Joey!
Pretty sure I’m meant to feel sorry for a lot of people in this book actually, but Joey stole the spotlight as well as my heart.

This isn’t my usual genre of story, though I do sporadically read thrillers – I found this one very well written and hard to put down. I wasn’t desperate to know what happened next, it didn’t compel me into a speed read situation, but I enjoyed making my way through it and as it happened I was able to read it in one day.
Part of the reason I think I enjoyed it so much as that everything circled back and was interwoven and related which is something I love. There were coincidences and connections and I just needed to see how they were related!

There were a few things I didn’t like though.
Mainly, I didn’t like the thought that there are actually people in Joeys situation. That this system, meant to protect him, failed him so badly. That he went through all that on his own. No, I’m not blaming those around him for not noticing what he was going through – he wasn’t noticed because he didn’t want to be but it’s just sad.
I also didn’t like the landlady. The heck does she mean that Lydia was too old?! She was only 10 years older than him! Why is it alright for the age gap to be the other way around but when the woman is older ‘it’s just wrong’?! Grr.

There were also creepy men all over the place. I don’t know whether they were there because it’s something ‘normal’ to the author/this situation or if they were written in to highlight them. I’m hoping it’s the latter because if so, well done Mr Sullivan! More attention needs to be aimed at this situations so many women find themselves in every day.
At one point, when Lydia returns to a place, she even takes her friend Raj because of the creepy guy. It’s not like she said “Hey, there was a creepy dude, come with?” but she clearly felt more secure going with back up.

This story answered a lot of questions for Lydia, it wasn’t just about Joey. She had a big even in her past too that had impacted her in a massive way so she needed to deal with that and everything connected to it. While there was nothing good about Joey’s death, the fact that Lydia sorts herself out is perhaps something.