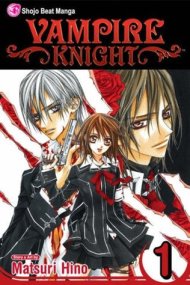 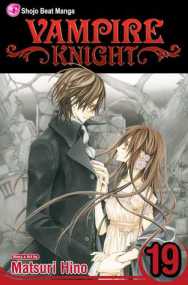 “by the time you open your eyes, the world might have already changed.”
-volume 7

Yuki Cross has no memory of her past prior to the moment she was saved from a vampire attack ten years ago. She was adopted by the headmaster of Cross Academy, and now works alongside Zero to guard the Academy’s secret. Cross Adademy is attended by two groups of students: the Day Class and the Night Class. At twilight, when the students of the Day Class return to their dorm, they cross paths with the Night Class on their way to school. Yuki Cross and Zero Kiryu are the Guardians of the school, protecting the Day Class from the Academy’s dark secret: the Night Class is full of vampires!

PLEASE NOTE: This review may contain spoilers, I’ll try my best to keep them at a minimum/appropriately vague.

I’ve read the first 5 of this series twice before but never progressed further. I finally did it!
I had a basic understanding of this series from Wiki, I remember looking it up before all the books were out in English/available here. There was a major plot point I found out and I wondered what they’d do with it because manga and anime can be edited heavily from the original as the Japanese market is very different from the Western one. I’m not sure if what happened in this translation is what originally happened or if they created another ability to make the other guy the baby, either way it’s still weird.

When reading manga and you reach endgame HEA before the end, that is the place to STOP!! Because chances are if you keep going, everything will be undone again and you’re going to finish on a sad ending…That happened here, but there was so much more to go when I reached endgame I just had to keep going. Mainly because I needed the book count…
I didn’t like this ending! It wasn’t just the interesting solution to the love triangle that I was 100% not behind at all, but also the last gift. The characters couldn’t have acted any other way in the situation, that’s not what I have an issue with, it’s the need to end it like this, why?! WHY?!!
(At least he has the other two I guess. One is his right?)

Kaname was of course my favourite character and his back story and personality were by far the best of the lot. Also I have to say Yuki was one of the better manga protagonists, she was similar to many others of course, but she came across as far more efficient. Maybe more are like that than I remember…mostly I remember the DBZ and Sailor Moon animes from my childhood.
I guess I should feel sorry for Zero and he’s not that bad really, he was just in the way which made me not like him. I never like the third wheel in love triangles, they are just there to cause confusion and pain. Not many people like to be confused and in pain. He did tave a hard time of it though, so I do feel horrid hating him completely, we’ll go with mild dislike.

I love me some vampires and I have to say I really liked the vampire type in this. They were  different to the original myth, but I won’t go into why because it’s all relevant to the story line.
Though the idea of them only craving the blood of their beloved is both romantic and tragic.

This was a long series at 19 volumes.
I found it hard to keep track of the ‘extra’ vampires. some looked very similar and had various names that meant they kind of blurred together for me. Especially as some appeared to come and go. There were two in later volumes I didn’t remember and I was sure they hadn’t been any of the middle volumes if they’d been in the first ones.
I read all 19 volumes over a few days though so it’s hard to say what was where and what I’d forgotten along the way to make room for more information.

Not my favourite manga series to be honest, but still a pretty good one! I put it back on my shelf after all.