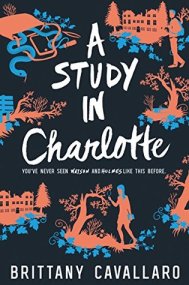 “I began to wonder if there was some kind of Watsonian guide for the care and keeping of Holmeses.”
-Page 175

The last thing Jamie Watson wants is a rugby scholarship to Sherringford, a Connecticut prep school just an hour away from his estranged father. But that’s not the only complication: Sherringford is also home to Charlotte Holmes, the famous detective’s great-great-great-granddaughter, who has inherited not only Sherlock’s genius but also his volatile temperament. From everything Jamie has heard about Charlotte, it seems safer to admire her from afar.

From the moment they meet, there’s a tense energy between them, and they seem more destined to be rivals than anything else. But when a Sherringford student dies under suspicious circumstances, ripped straight from the most terrifying of the Sherlock Holmes stories, Jamie can no longer afford to keep his distance. Jamie and Charlotte are being framed for murder, and only Charlotte can clear their names. But danger is mounting and nowhere is safe—and the only people they can trust are each other.

This was not the best American/English cross cultural book I’ve ever read but by no means was it the worst either. A few times there were things that were american when they should have been English, but it wasn’t too noticeable. Generally the whole thing started a little shakey and I was sad as I’d been looking forward to this book but it picked up pretty quickly and delivered the humour I’d been expecting. It’s not THE Holmes or THE Watson, but their dynamic is pure Holmes & Watson. Of course with Holmes being female it’s added an obvious romantic twist I’m not actually mad at. Yes they could have had the twist anyway – would like to see that explored sometime! – but I’m enjoying Holmes being clever and smart and female too much to care. We’ve had a female Watson before, but not the Holmes – as far as I’m aware (or…wait, was there a tv show?!). It’s nice to have another clever female role model out there.

I loved the inevitability of their meeting and it was almost like a spoofy retelling. A Watson must have a Holmes and a Holmes their Watson and of course they will have the same personality traits as their ancestors – it’s in the name! It was a story about fated friendship and I liked that they didn’t fight it. And then there was the ‘Watsonian guide’  which was brilliant. The way they all followed the same basic patterns and all had the same “I’m clever, you wont look here.” hiding places was hilarious and so clever.
I would say that perhaps Charlotte’s application of drugs is the opposite of her famous forefather. If true, it’s horribly stereotypical but almost ties in with the most recent series of the BBC show right now so it’s also kind of clever and most likely accidental too.

I haven’t read any other Holmes books but I have watched several incarnations and this Watson seemed to come across as smarter. I’m not sure if it’s just my perception or if it was on purpose – he’s read the books of course and he’s young when he meets his Holmes so he’s more open to learning. He’s also forewarned about how the Holmses behave so there is that.

I wasn’t aware this was so young a series either! I thought this was an older series and was prepared to buy two and three right after I finished reading this one, but paperback 2 won’t be out till next year! I wonder how this will do as a re-read?
It’s told by Watson’s POV of course and he wants to be a writer – of course.
And they also spent a lot of time in Sciences 442…..