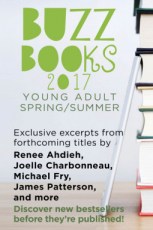 Thank you to Netgalley and the Publisher for the chance to read this book in exchange for an honest review.
Publish Date: 13th January 2017

Our sixth edition of Buzz Books: Young Adult provides the special excitement of Winter Institute and takes it even further with samples of the best in forthcoming young adult novels months ahead of their actual publication. Publishing insiders— librarians, booksellers, bloggers and reviewers—rely on Buzz Books to survey breakout titles on the horizon.
These substantial pre-publication excerpts reflect a broad spectrum of today’s young adult writing, from fantasy and romance to suspense and humour. You will discover debut writers to put on your radar, while enjoying early samples from some of the biggest authors in the field and even a memoir for younger readers.
Three New York Times bestselling authors share new work: Renée Ahdieh (The Wrath and the Dawn and The Rose and the Dagger); Cora Carmack (the Losing It series); and Joelle Charbonneau (the Testing trilogy). Ahdieh and Charbonneau are previous Buzz Books authors, so we’re delighted to have them back.
Beyond the boundaries of YA, we also feature two middle grade titles from JIMMY Patterson, the children’s imprint that James Patterson founded to encourage every child to love reading.
Start reading the bestsellers of tomorrow right now to see why reviewers rave with comments like these:
Love Buzz Books! They are so helpful for librarians. This YA sampler is particularly great for any librarian with a sizable teen population. Some very interesting titles highlighted here, in a wide variety of genres.
Your reading friends can download this free edition of Buzz Books at any major ebookstore or at buzz.publishersmarketplace.com. For broader reading, check out Buzz Books 2017: Spring/Summer, also available now, for 40 excerpts from top forthcoming adult fiction and nonfiction titles.

January?!? Well, I knew I delayed in reading this book, but I didn’t realise it was that long!!
Ms4Tune enjoyed a sample set like this some time ago and it encouraged me to try one for myself. It wasn’t until after I’d been accepted for it that I realised it was perhaps not something I would enjoy, all those start-stops! Took me forever to build up to reading it though! I’ve already read three of the books and own another 2!

Renee Ahdieh – Flame in the Mist

This is a mulan retelling! This is a story I’ve already read an enjoyed. It seems to be set in some kind of alternate Japan though I think.

Emily Barr – The One Memory of Flora Banks

I don’t really like stories where one friend goes out with/kisses another’s boy/girlfriend etc even if they’d split first. It’s a fuzzy moral line and I really don’t know what to do with those. I didn’t quite realise that this is what this book was about, I just thought the boy was a boy, not a friend’s boyfriend.
This excerpt was pretty good though! Which is lucky as I own this book! I’d hoped to have read this book before now, but it might be some time now before I get to it. I look forward to reading it though, Why does she remember?!?
This is a contemporary story.

The summery of this sounded odd to me – according to the notes I made when I read about this one. I classed it as an urban fantasy/sci-fi story and thought that it reminded me of what I remembered of Obsidian by Jennifer L. Armentrout and Neptune’s Tears by Susan Waggoner. This extract didn’t really cover anything from the synopsis, it was just the setting up of both their worlds. It was interesting but a little too familiar for me.

This was a sequel and now I know the plot of book one… You might not actually need to read it at all to read this book, it’s got a really good recap going on – probably very annoying for those who’ve just read the first though, I’m sure.
I ended up REALLY curious about their ‘future selves’ but there’s the old “she’s the problem” cliche that will only end in tears.
This is a time hopping Sci-fi.

I don’t read many contemporary books but I feel that this is a little cliche – it opens with a break up.
I was NOT impressed with this. One character deeming another to have ‘too much class’ to be gay?! Uh, no thanks.
This was one of the longer excerpts and was almost a story in itself.
Piper is whiny, self-centred and annoying. Not to mention her attitude towards people was just grrrr. I can perhaps see her point of views, but her inability to see anyone else’s aggravated me.

I’ve read this one.
It’s a slow starting fantasy but when I got to the end I’d enjoyed it more than I was expecting to.

Erin Chack – This is really Happening

This is a memoir and I don’t really read memoirs – or any non fiction at all to be honest. I have 4 memoirs on my selves waiting to be read.
This was written well however and I thought that Sean was a sweetheart!

I received this in my June Mark The Page book box and I hadn’t heard of it.
Sibling rivalry is not something I like to read about, especially when it’s forced. It makes it so much worse when they’re close too so this isn’t a book I’d have chosen for myself.
It has a good start, mysterious and world building without info dumping. I’m already on Carys’s side….
It’s a fantasy story I’ll certainly give a chance to

It was interesting to read about a culture different from my own. It’s written in first person and written well but it’s not my kind of book.
I don’t know enough to know whether this is a historically inspired book or if it’s complete fiction.

This fantasy starts with the ‘meant to have power but doesn’t’ trope. But it was actually well written and engrossing. It reminded me of the Obsidian Mountain series by Mercedes Lackey – (while that was hard to get into the pay off was fantastic) the deep misunderstanding that is going on here and the naive MC. I’m quite interested in reading this one!

Michael Fry – How to be a Supervillian

This is the first of the two teen books promised.
It’s full of drawings which was interesting. It’s funny but again involves choosing between people. I’ve never read captain underpants but it feels like that kind of book. It’s written by a cartoonist and makes a good transition from picture books to full books, or even the kind of book for those who also require a visual with their words.

Meg Haston – The End of Our Story

This mysterious contemporary starts with a reformed relationship and the MC wants out of town. (At this point I was getting annoyed at all the samey openings.) She did something and her best friend turned boyfriend is now speaking to her anymore. He seemed rather nice but I guess the key word is SEEMED. Though she knew him/them for 8 years and spent so much time with them an saw NO SIGN of a temper? Or perhaps she did? They synopsis and/or extract don’t let on. I’m curious about the murder but I really don’t think I’m curious enough to read it.

This has the same feel as How To Be A SuperVillian and is the second teen book.
It’s an interesting concept about a boy with a big idea and the drive to go for it.
Not the sort of book I’d like, the writing style is not a favourite. It’s one of those that says “I’ll tell you something…” and then tells you everything BUT the thing.

I think this contemporary story would be a very good book for people who like to read about real-world ‘small’ issues. Gen was abandoned by her boyfriend after an abortion. I can’t fathom someone doing this at all and I really don’t like him for doing it. What’s worse is that there are actually people out there like him.
I thought that the ‘play’ bits would be really annoying but it’s actually a really created way of showing flashbacks.
There are other issues going on too of course, obviously something we’ll be told of within the storyline, possibly involving a jealous girl?
I’m curious and I like the way it’s set out but I really won’t be able to deal with the guy.

I’ve read this book too and I really enjoyed this contemporary retelling of a fairytale (can you guess which one?!)
It reminded me of Galaxy Quest – but without the actual aliens…

Break up, blah blah, moves to a new town, blah blah, a town across the country etc etc.
It DOES sort of poke fun at itself for being so stereotypical though. It has a nice, if generic intro but it will focus on racism which makes me uncomfortable – as it should, of  course – and I don’t like to feel uncomfortable.
If that’s your kind of book then give this one a go maybe?

This covers depression and has no sign of any cliches I know!
No new people, no moves, just a meet cure in the prescription line! It was a well introduced contemporary story.
I think this was one of the shortest ones.

She’s had to take care of her sister and her sister’s doing fine now, but she isn’t and her sister really isn’t helping!
That really annoyed me, the younger sister seemed completely oblivious! It’s almost as though they live in two different worlds.
I can see that giving her sister up would do her so much good but she loves her and I really don’t think that I’d be able to really read this happily.

I got on better with this than I thought I would the stopping and starting didn’t bother me all that much and I got to explore books I wouldn’t usually have tried out. The ones that stick are 16 and 12, aside from one I already own.
These stories cover a lof of important subjects that need far more attention than they currently have. There’s also a lot of bailing men in them and some other characters  that I don’t like either.

I might be tempted to read another Buzz Books again as the experience was a lot better than I thought it would be.