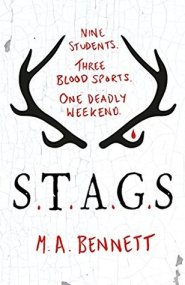 Thank you to Netgalley and the Publisher for the chance to read this book in exchange for an honest review.
Publish Date: 10th August 2017

It is the autumn term and Greer MacDonald is struggling to settle into the sixth form at the exclusive St. Aidan the Great boarding school, known to its privileged pupils as S.T.A.G.S. Just when she despairs of making friends Greer receives a mysterious invitation with three words embossed upon on it: huntin’ shootin’ fishin’.

When Greer learns that the invitation is to spend the half term weekend at the country manor of Henry de Warlencourt, the most popular and wealthy boy at S.T.A.G.S., she is as surprised as she is flattered. But when Greer joins the other chosen few at the ancient and sprawling Longcross Hall, she realises that Henry’s parents are not at home; the only adults present are a cohort of eerily compliant servants.

The students are at the mercy of their capricious host, and, over the next three days, as the three bloodsports – hunting, shooting and fishing – become increasingly dark and twisted, Greer comes to the horrifying realisation that those being hunted are not wild game, but the very misfits Henry has brought with him from school…

This book flowed nocelt and was well paced. However it promised me blood but gave me nothing more than splatter! THERE WAS NO SURPRISE! The expected tension was dispelled with a simple sentence at the beginning. I was expecting far more death – I was possibly even looking forward to a nice gruesome read –  and I find myself left feeling disappointed. The twist ending was obvious and i really did finish the book wondering if the characters were a special level of idiot…

This is told from Greer’s point of view and she doesn’t start off coming across as sort of stupid bit I really don’t think she’s nearly as clever as she thinks she is.
She’s a film-a-holic and she’s often explaining things in film scenes, which is helpful if you’ve only seen a handful of the ones mentioned…If you haven’t you’re left to imagine the scene out in your mind rather than recalling the scene in your mind – which might just be the point of the book.

I’d have loved to have seen some of this book from Shafeen’s POV to be honest. I’d have liked to see further explanation for the reason why he finally accepted the invitation after so much time, I didn’t think that the reason told was sufficient for what I thought was coming at least.
I thought Nel was going to be a rival so I was prepared to dislike her then never really cared either way.

I don’t support the harassing of fellow peoples, but I was almost with Hen when it came to his assessment of technology. I know someone with multiple Amazon echoes in their home and other people with an electric salt grinder which just amazed me, especially having watched SpyKids 2 recently. Hey look, a film reference you won’t get if you haven’t seen the film! (They wind up on a magnetic island and all of their voice activated items and gadgets don’t work)
iPads are given to children to shut them up and make them go away instead of having a chat with them or playing with them and we spend all our time on our phones – can’t stand a moment of boredom, can’t think, must be entertained! Me too – Instagram – Pinterest – Amazon Kindle.

I loved how the world of posh old money was described. Their things were old. There was history behind them and they still had them because they were still in working order. It appealed to me because I’m not a fan of our throw away would. I try and do my part – I’ve replaced things in my life with re-usable options etc but with the world of technology moving at the pace it does it’s likely to only get worse.

In short, I wasn’t wow’d but I also wasn’t bored. It didn’t give me the bloodbath I wanted, but it did make me think.