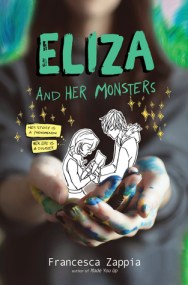 Creating art is a lonely task, which is why we introverts revel in it.”
- Page 358

Her story is a phenomenon. Her life is a disaster.
In the real world, Eliza Mirk is shy, weird, and friendless. Online, she’s LadyConstellation, the anonymous creator of the wildly popular webcomic Monstrous Sea. Eliza can’t imagine enjoying the real world as much as she loves the online one, and she has no desire to try.
Then Wallace Warland, Monstrous Sea’s biggest fanfiction writer, transfers to her school. Wallace thinks Eliza is just another fan, and as he draws her out of her shell, she begins to wonder if a life offline might be worthwhile.
But when Eliza’s secret is accidentally shared with the world, everything she’s built—her story, her relationship with Wallace, and even her sanity—begins to fall apart.

I recently got into booktube (I decided I spent too much time on youtube and that I should be spending more time reading, so I looked up book videos…I have a problem.) and several booktubers recommended this book. It wasn’t until I heard it compared to Fangirl by Rainbow Rowell that I decided to give it a go.

I can see why they’ve been compared. The MC is obsessed with creating something and pieces of that creation are at the end of chapters too. I’d say that that’s mostly where similarities end however. Eliza is creating her own, original work, very successfully, and she’s in high school. Eliza also suffers from anxiety and while I know Wren had some struggles I don’t think they’re the same.

I really enjoyed this book. I thought it was written really well. It’s first person and contains what I assume to be mixed media – There are some chat conversations, emails, comic pages and story drafts. This is the first book that I can recall that’s been like this (good preparation for Illuminae next month?!)

At first I thought the way she interacted with her parents was bad on her part, but I reminded myself she was an anxious person and her brothers actually had a FANTASTIC point when they defended her against their parents later in the book.Gosh they were fantastic brothers! I started to realise that her parents weren’t as good as they thought they were, I guess she got her attitude from them. I mean with ANYONE you don’t start a conversation with “Stop doing what you’re doing right now, do this instead, do this, I’m disappointed in you.” etc, Especially with arty/creative/obsessive people. Generally you’d start with “You do realise what day it is?!”

What I really liked was that it was a fan who pulled her into her local world, not a cute boy. The cute boy could fend for himself, but once he was revealed to be a fan, she decided he had to be helped.
Which leads us nicely to Wallace. I can’t truly express how I feel about Wallace without spoilers of some kind to be honest. I have mixed feelings about him. I loved him, he had his own issues and he really seemed to understand Eliza, but then he was a complete and utter git! What the actual fluff Wallace?! Seriously.

I hope Eliza writes the lady back and tells her how it all went down in the end, maybe send her a set, just to know why it exists not for it to be read. I think that, if it were me, I’d love that!

This book gave me some nostalgic moments. When I was in secondary school and sixth form myself some friends and I reacted our own world and populated it with fantastic creatures and horrid people. It started as a sort of tan tribute to something else at first and just grew.
We even had a series of websites centred around all of it! I spend many lessons writing stories about our creation, instead of paying attention…it fizzed out after many years but I still think about it now and then. This book brought it all back and I love it!

This book also made me cry. I happened to find the saddest bits the morning before a meeting I was having, luckily no one realised my eyes were really puffy! Though when I was finally able to return to the book I didn’t cry anymore, I think the interruption of the sad bit meant the ending didn’t have as much impact as it should have, but if I re-read it I’ll know this so I’ll prepare accordingly!

Apparently Francesca writes Eliza’s favourite Novel series as a serial novel on Tumblr and whattpad. I hope she also writes monstrous sea too! Though that might be pushing our luck just a little…