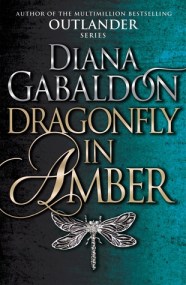 “If you doubt it, go to the National Portrait Gallery. They’ve a picture there of Ellen MacKenzie; Jamie’s mother.
Take along a hand mirror, Take a good look at the portrait and then in the mirror. It’s not an exact likeness, but you’re very like your grandmother.”
- Page 85

For twenty years Claire Randall has kept her secrets. But now she is returning with her grown daughter to the majesty of Scotland’s mist-shrouded hills. Here Claire plans to reveal a truth as stunning as the events that gave it birth: about the mystery of an ancient circle of standing stones, about a love that transcends the boundaries of time, and about James Fraser, a warrior whose gallantry once drew the young Claire from the security of her century to the dangers of his.Now a legacy of blood and desire will test her beautiful daughter as Claire’s spellbinding journey continues in the intrigue-ridden court of Charles Edward Stuart, in a race to thwart a doomed uprising, and in a desperate fight to save both the child and the man she loves.

Forewarning: there will be some comparison to the TV show, because once I finished listening to this audiobook I recapped part 1 of series one then watched the second half and kept going through part of the first half of season 2. They covered one of the issues I had with the book but created so many more.

This took forever to listen to because I didn’t drive myself anywhere alone for some time.
At the start of the book I cared nothing for Claire Randell and her daughter. In actual fact it really got on my nerves whenever Randell was mentioned, especially “Brianna Randell” grrr!
However, when we finally returned to 18th Century Claire Fraser, I wanted to be back with Brianna and Roger etc.
Don’t you just love it when books do that to you?

This book, just like the first, had serious moments that really hurt my heart and I know it’s only going to get worse. I will be pacing myself with the other books. I was considering stopping after 3 and the return, but I accidentally saw a photograph of something that’s going to happen and I really want to know about that, but also I recently found out that there’s an explanation of Jamie’s ghost turning up in book 1. I personally thought I had it worked out but now I’m really excited to find out all about it! I don’t know if I’ll be more disappointed to be right or wrong…
We have to wait until the end of the last book though. (what more have these guys got to go through?!)

The narrator of these books does so well and I hope that she will be doing the entire series. She’s pretty good with the accents too and It’s lovely to hear! Speaking if which, once she’d committed to staying and to helping however she could, why on earth did she not actively seek to learn Gaelic or even Scots and the accents around her?! She’s in a country where her way of speaking raises hostility and suspicion. I would have thought that a priority. It’s something I would have put at the top of my list at any rate.

Many of the things that I had questions about or that bothered me going into this book, were addressed or answered. I had a list of why’s which ended up mostly gone, except for the main one. I don’t think it’s much of a spoiler, but if you’re worried please stop reading!
She said she couldn’t look them up, HOW COULD SHE NOT?! I would have needed to know. I wouldn’t have been able to stand it. This attitude makes me feel less angry at something I think Jamie does later, (it’s not like she old him who set her up or anything…).
They fixed this in the show, they made Frank make her promise to stop looking for him. Doesn’t make me dislike Frank any less though…They changed how the end of season 1 helped him too and while his reactions might be more ‘realistic’ it takes away from what Claire did for him and how they are at the start of this book. The books has them much more us against the world’ which I think also helped Jamie.
Also, they promised to be truthful and while she didn’t like, there are many things that she didn’t say or tell him. There was one sentence I was particularly annoyed she didn’t say, but later it turned out it was possibly lucky she hadn’t…
Another is yet to bite her back, but I’m waiting for it…

So these are the reasons this isn’t 5 voodoos. Silly? Maybe, but they still bothered me!
No more of this world for a little while. I’m going to finish series 2 and then burn through a few of Ice and Fire before I keep going.