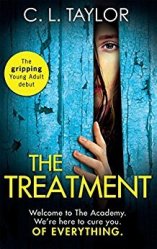 Thank you to Netgalley and the Publisher for the chance to read this book in exchange for an honest review.
Publish Date: 19th October 2017

You have to help me. We’re not being reformed. We’re being brainwashed.
All sixteen year old Drew Finch wants is to be left alone. She’s not interested in spending time with her mum and stepdad and when her disruptive fifteen year old brother Mason is expelled from school for the third time and sent to a residential reform academy she’s almost relieved.
Everything changes when she’s followed home from school by the mysterious Dr Cobey, who claims to have a message from Mason. There is something sinister about the ‘treatment’ he is undergoing. The school is changing people.
Determined to help her brother, Drew must infiltrate the Academy and unearth its deepest, darkest secrets.

Before it’s too late.

Firstly thank you so much to HQ for getting in contact with me to see if I was interested in reading this book in exchange for an honest review!

This books was a psych-thriller rather than sci-fi, more’s the pity – not that there’s anything wrong with that, but I had cultivated the hope that this was going to be a creepy science fiction-y book!
I think Sci-fi makes it both scarier and also less scary. Scarier because anything can happen, less scary because it’s more unlikely to happen…

I’d have liked to have seen more about Mason because I think he must have been a pretty amazing character, he was our catalyst though and Drew was pretty fantastic too. She’s the one we spend most of our time with as the book is in first person and may other characters seem less structured in comparison.
It felt like the book moved really fast – Drew jumped right in with both feet and hardly looked back, which was a bit of an odd thing to do for a brother she was relieved was gone. But then he WAS her baby brother and he WAS under threat, plus coupled with what she saw I guess it’s not quite that far fetched that she went for it.
I liked that she wasn’t quite ballsy enough to pull it off, but she went for it anyway. Luckily she found herself some help along the way!

The plot was quite simple and nothing really surprised me, I think the book is perhaps an early YA book, the whole thing was well done but it wasn’t as complex as you might have expected from the premise.
The repetition of the bullies as a plot point was annoying especially as there was no reason for Lacy to be there? It was a little confusing. This whole plot point didn’t really seem to fit, but perhaps I just spread reading this book out too much and missed out on the build up.

With regards to the ending I have to say, it was lucky he was there and I’m confused about where he took them at the end?! Perhaps it’s actually obvious, but I didn’t get it!
But the very worst thing is that I wouldn’t be surprised if something like this did happen.
When did the world become so obsessed with trying to shove everyone into one box? And why do we believe them when they tell us we belong there?