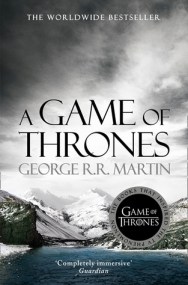 “Never forget what you are, for surely the world will not. Make it your strength. Then it can never be your weakness. Armour yourself in it, and it will never be used to hurt you.”
- Page 54

Long ago, in a time forgotten, a preternatural event threw the seasons out of balance. In a land where summers can last decades and winters a lifetime, trouble is brewing. The cold is returning, and in the frozen wastes to the north of Winterfell, sinister forces are massing beyond the kingdom’s protective Wall. To the south, the king’s powers are failing—his most trusted adviser dead under mysterious circumstances and his enemies emerging from the shadows of the throne. At the center of the conflict lie the Starks of Winterfell, a family as harsh and unyielding as the frozen land they were born to. Now Lord Eddard Stark is reluctantly summoned to serve as the king’s new Hand, an appointment that threatens to sunder not only his family but the kingdom itself.

Sweeping from a harsh land of cold to a summertime kingdom of epicurean plenty, A Game of Thrones tells a tale of lords and ladies, soldiers and sorcerers, assassins and bastards, who come together in a time of grim omens. Here an enigmatic band of warriors bear swords of no human metal; a tribe of fierce wildlings carry men off into madness; a cruel young dragon prince barters his sister to win back his throne; a child is lost in the twilight between life and death; and a determined woman undertakes a treacherous journey to protect all she holds dear. Amid plots and counter-plots, tragedy and betrayal, victory and terror, allies and enemies, the fate of the Starks hangs perilously in the balance, as each side endeavors to win that deadliest of conflicts: the game of thrones.

Unparalleled in scope and execution, A Game of Thrones is one of those rare reading experiences that catch you up from the opening pages, won’t let you go until the end, and leave you yearning for more.

This was my only grey book for last month. Why am I only reviewing it now? Because I’m recklessly flaunting my own rules, that’s why.

I’m late to the Ice and Fire game. Way back when, I enjoyed the first 2 episodes of Game of Thrones and decided I had to read it before I watched it. That was fine, except it took a lot longer to go through everything that had happened in the first 2 episodes in the book than I’d thought it would and I got so bored I gave up. I even gave away my books. Then at some point I joined Audible in an attempt to get into audio books again, but I really didn’t pay attention and my tokens piled up as much as they can. When it came to spend them or loose them, I bought the A Song of Ice and Fire series.
Finally, after season 7 finished and I was back into audio books and needed a break from Outlander, A Game of Thrones came to my rescue!

Far enough away from the start now, I rarely got bored. I was even encouraged to listen to it in more places than the car – though that might be because September was drawing to a close! I listen to it on time and a half, because sometimes Roy Dotrice reads too slowly for me and that little extra makes it better, the rest of the time he’s just in a hurry is all. It also hides where he pauses in the wrong places and doesn’t pause when he should, have you noticed that? It was annoying!

This is like a re-read in that I have no ‘first impression’ and there’s also an element of book vs show.
Generally, not much was different except their ages and general descriptions. I thoroughly enjoyed the shear wealth of foreshadowing in this book though! “Rhaegar died for the woman he loved!” “Promise me Ned!” etc etc and if you pay careful attention to how people phrase things, you can see it’s all leading up to the big reveal we’ve recently had in the show, which I wont address directly because spoilers! It’s so clever, I love writing like that!

The descriptions take up a lot of time, obviously, and they can be pretty tedious. But with audio books you can drift in and out so that’s fantastic.
Really hating on Jof right now, but then are you surprised? What WAS surprising was how much I also hated Catelyn! That woman was terrible! So much of this can be traced back to her and I just want to throttle her, ugh. I am however enjoying Tyrion, Jon and Dany’s adventures. Perhaps that’s because I already like them?
I feel better about Sansa too, again possibly because I like the essence of her. She’s also a bit more interesting in the book than the show.
Arya’s not that interesting yet, but I look forward to her next adventures.

I’m really not sure why Tyrion appears to be Welsh…