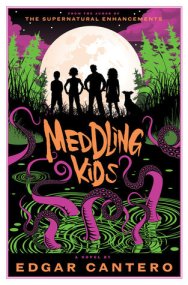 “Some form of unremarkable weather, profoundly commonplace for meteorologists but somehow relevant to the overall colour of the scene, was taking place.”
-Page 90

1990. The teen detectives once known as the Blyton Summer Detective Club (of Blyton Hills, a small mining town in the Zoinx River Valley in Oregon) are all grown up and haven’t seen each other since their fateful, final case in 1977. Andy, the tomboy, is twenty-five and on the run, wanted in at least two states. Kerri, one-time kid genius and budding biologist, is bartending in New York, working on a serious drinking problem. At least she’s got Tim, an excitable Weimaraner descended from the original canine member of the team. Nate, the horror nerd, has spent the last thirteen years in and out of mental health institutions, and currently resides in an asylum in Arhkam, Massachusetts. The only friend he still sees is Peter, the handsome jock turned movie star. The problem is, Peter’s been dead for years.

The time has come to uncover the source of their nightmares and return to where it all began in 1977. This time, it better not be a man in a mask. The real monsters are waiting.

I ended up really disappointed with this book.
There was such a good foundation that I really couldn’t see what could go wrong! It wasn’t quite everything.

This is sort of a Scooby Doo retelling which just sounds amazing. The Fred character, Peter, is dead. Daphne and Velma have been combined in Kerri, who is the owner of the dog, Tim. Andy seems to almost be a borrowed George from The Famous Five, which fits in with the dog Tim and Nate, Kerri’s cousin is most definitely Shaggy, they even share a surname! He’s also hanging out with the dead Fred, Pete.  It’s been 13 years since their last case, it’s looking like they missed something and that some monsters might just be real. and that’s mostly where the amazing ends.

I was expecting a YA book, but this is a lot more heavy duty and therefore I feel aimed at an older audience. Which is fine, I just had to reassess my mindset and focus on rather than relax into the story. The writing style is also all over the place, which was weird but sometimes amusing. Made up words, slips into screenplay, thoughts from inanimate objects. I didn’t mind these, some of them were actually quite funny for me to find.

I think what annoyed me most was my first brush with the stereotypical “male writer writes female character.” cliche. It could have been worse, they weren’t hyper aware of their body parts all of the time, but there were moments. And there was a (mostly/straight) male-fantasy subplot that missed ‘acceptable’ and nosedived into creepy. What tipped it into creepy for me wasn’t some kind of man-only mistake because female writers have done it in the past too – when there is a reluctant or uninterested one in the relationship and the other (usually male) kind of steamrollers over them with the basic assumption that they’ll get over it.
This happens A LOT to women in real life and it needs to stop being seen as acceptable.
For me, this is what prevented it scoring any higher than 2.5 Voodoos. The story wasn’t gripping but nor was it boring, but I made my way steadily through it. I still love the idea of this book, just not the actual execution.

As to the plot, well that was quite clever. It was Scooby Doo without being Scooby Doo. The elements were definitely there and even though this time it wasn’t a man in a mask, there was some misdirection and shenanigans going on that wouldn’t have been out of place in a Scooby episode.

I was also left confused as to how exactly Nate was seeing Pete. Was he hallucinating? Actually seeing the dead? Did his last conversation with the dog provide the key to this mystery? I think Nate has to be my favourite character, we know the least about him but he was perhaps the least messed with. I wish we’d have more of Nate in the story to be honest.

As to the question of whether this book is diverse – eh, it tries to be but it kind of misses, like it’s half arsed or isn’t quite understood. I almost want to say it has the feel of an early ‘diverse’ book. Wonder if that’s deliberate as the book is set in the 90′s?
Hmmm…