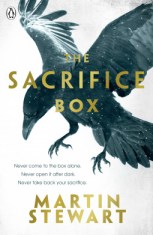 Thank you to Netgalley and the Publisher for the chance to read this book in exchange for an honest review.
Publish Date: 11th January 2018

An atmospheric, chilling page turner from rising star Martin Stewart, reminiscent of Stand by Me and Stranger Things.
Sep, Arkle, Mack, Lamb and Hadley: five friends thrown together one hot, sultry summer. When they discover an ancient stone box hidden in the forest, they decide to each make a sacrifice: something special to them, committed to the box for ever. And they make a pact: they will never return to the box at night; they’ll never visit it alone; and they’ll never take back their offerings. Four years later, a series of strange and terrifying events take place. Someone broke the rules, and now everyone has to pay. But how much are they willing to sacrifice?

I don’t think I’d compare this book to Stranger Things – which is what got me wanting to read it – the only similarities are the edge of horror, 5 friends and the 80′s. Still, I guess it got me to read the book which was the point!
I’ve said it about this books before but the ‘something in the woods’ feel of this made me think of the Sign of Seven trilogy by Nora Roberts. In those some children find something in the woods…but again, that’s where the similarities end.

I received a copy of this book in the September Book Box Club box as a bonus item as well as from Netgalley. The copy from Netgalley got me reading it before the publish date, but mostly I read the paper copy.
I didn’t really think about it then, but this would have been a great October read! It wasn’t terribly scary and the most tense parts I actually sped through because I was actually meant to be doing something else, but I definitely spent some time on edge! I think it would have been terribly satisfying to read it in the spirit of Halloween.
Just, please don’t read this book while camping in the woods…

For me this book had a slow start and some of it was something of a confusion. I quickly learnt to read the chapter headings, because sometimes they weren’t just headings but times and places or people or something and that really kinda helped you know what was going on…
I was left with a few questions but I think that perhaps I was meant to. I also think that had I not been rushing to the end before I had to go to work the end might not have felt quite so frantic. Having said that, I like that it felt frantic to me, it added to the anticipation and I do like anticipation.
The ending was good, but there could have done with more around it. I mean, didn’t he technically break a rule again?!
More to the point, I’d have liked to have seen some of the aftermath. There were some conversations I really wanted to see him have with his mother! They would have been so awkward and confusing. “Yes, I know the thing because of reason.” “Wait, what?”

This was written in the UK!
I’d say ‘set in the UK’, but I haven’t worked out where exactly yet. I’m not the best at paying attention to locations – I assumed it was set in America until mention of a Blue Peter badge popped up.
It’s also set on an island and Sep keeps looking to the mainland. If we have any more clues, I don’t remember them…

This has also been compared to Stephen King apparently. That makes more sense to me than Stranger Things – but then that was written in the style of Stephen King, so yes?
I find Stephen King quite heavy on the description which is not my favourite Maybe I need to audio book him too?!
This was a lot lighter (and possibly a tad less dark). A good book to ease you into Stephen King, or to try if you find King just that little bit too hard.

I think that I would read this book again sometime. Hopefully slower, so that I can glory in the terror I’m sure I was meant to pick up on!