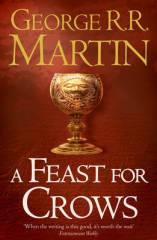 “Sometimes there is no happy choice, Sam, only one less grievous than the others.”

The Lannisters are in power on the Iron Throne.

The war in the Seven Kingdoms has burned itself out, but in its bitter aftermath new conflicts spark to life. The Martells of Dorne and the Starks of Winterfell see vengeance for their dead. Euron Crow’s Eye, as black a pirate as ever raised a sail, returns from the smoking ruins of Valyria to claim the Iron Isles.

From the icy north, where Others threaten the Wall, apprentice Maester Samwell Tarly brings a mysterious babe in arms to the Citadel. As plots, intrigue and battle threaten to engulf Westeros, victory will go to the men and women possessed of the coldest steel and the coldest hearts.

I wasn’t as into this book as I was book three. I had heard that after the first three George started to focus more on how the world worked.
That wasn’t really a problem for me, I didn’t notice that to be honest. What I didn’t like was the new POV’s I didn’t care about the Iron Islands! And I also didn’t like that there was so much Cersei.

Having heard this book wasn’t as good I had low hopes which I guess might be why I liked it more than I thought I would! I sort of wish I’d liked it more though, I sort of feel like I’m following the crowd.
I wanted more Tyrion!! – I guess I’m meant to assume he’s dead? but I’ve seen the show so yeah, no.
I also wanted more Jamie and Brianne and Arya and Sansa and Jon!!!!  Not all this Cersei rot. Not so bothered about Dany to be honest, things will get better but she’s still off in the great not-with-the-others.

I was surprised where we were left with regards to everyone. The second half of the book was mostly Crappy Cersei, we didn’t get an ‘update’ on Dany or Jon like I was expecting. Though I’ve heard that this was written as all one thing along with book 5 which would have been a horrendous length!!! This does explain our random situation at the end though.
What WAS nice was to see Gendry again and to hear Brianne’s assessment of him was very interesting! I loved it.  It’s a shame she didn’t get to truly talk to him.
Can Gendry have a POV in the next book? Pretty please?

This didn’t cover as much of the story as I thought it would. Again, I think I’ve said this before in prior reviews – each time a chapter happened, I was surprised at where we were. Sometime it was an “oh, we’re only there” but I was beginning to get a few “oh, we’re actually there!” moments too, so that was interesting.

With this book, I thought it was really going to be so very different to the show. I’d heard they were quite different, but this was actually still really really close, I was surprised!
Brianne is having some adventures that weren’t in the show – mostly because her adventures weren’t actually shown.
Cersei is far worse in the book, she’s such an idiot too, it’s unbelievable. Especially as she thinks she’s so smart and clever.
We’re also going on longer adventures with some of the others, but other than that it’s pretty similar.

Only one more left to go now! – it’s double the length now though and while I’d consider a rest – I don’t know what to listen to instead and I really want to find out what’s been happening with the guys we’ve not seen in ages. Plus one of the last chapters had a cliff hanger ending – more so than the others because it’s not something that’s in the show so I don’t have prior knowledge!
I’m also hoping Sam’s adventures will match up to the show! I like his story arc and I’m hoping he’s going to have a similar one here. I’m really looking forward to listening to what’s to come, but I know that all the really best bits are not in the next book and might not even end up in the final one!