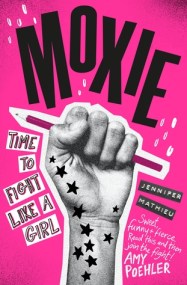 “Maybe my mother is right. Maybe I’ll leave East Rockport one day. But first I need to set it on fire.”
-Page 112

“it occurs to me that this is what it means to be a feminist.
Not a humanist or an equalist or whatever.
But a feminist. It’s not a bad word.
After today it might be my favourite word.
Because really all it is is girls supporting each other and wanting to be treated like human beings in a world that’s always finding ways to tell them they’re not.“
-Page 281/282

Viv’s mum was a tough-as-nails, punk rock Riot Grrrl in the ’90s, and now Viv takes a page from her mother’s past and creates Moxie, a feminist zine that she distributes anonymously to her classmates. She’s just blowing off steam, but other girls respond and spread the Moxie message. As Viv forges friendships with other young women across the divides of cliques and popularity rankings, she realises that what she has started is nothing short of a girl revolution.

A page-turning read with a feminist message, for anyone who has ever had to deal with #everydaysexism

I loved this book! You need to read it. No, really, there is absolutely nothing wrong with it! It does everything right. It covers what feminism really is, shows the right way to promote it (mostly) and even covers inclusive feminism. I think that’s the right term, but I don’t quite get it. If it doesn’t include minorities then it’s not really feminism…

The best bit is that Vivian is NOT an angry, ball-busting stereotypical feminist, you know, the ones used to scare people away from the word? In fact she doesn’t realise she IS a feminist until nearly two thirds of the way through. She’s actually a very shy girl who doesn’t want to make ripples let alone waves. The problem is that she attends a very misogynistic high school where the football team get away with everything because the only thing to do in the small town is to go to football games (not ACTUAL football – faux rugby, this is set in America – feet rarely touch the ball.).
One day she reaches her limit and wakes up to the fact that things are seriously wrong and she tries to get the other girls to see it too. She does most of it anonymously which is probably why it worked so well.

I loved who Vivian was. I loved watching all these young women stop and look at the world they lived in and realise that something needed to be done and then slowly build up to doing it. I loved how they began to look after each other and in the end forge friendships with people they never thought they were friends with.
There were no nasty cliche girls, just girls who didn’t know what feminism was and girls who didn’t want to make a fuss. There was, or course, horrid teen boys, but there were also some nice ones too. And what was nice was that they went through a struggle of their own. Trying to support the girls without making it about them. It’s an iffy area and I’m so pleased it was covered.
In the long run it was nothing to do with them. So, maybe not all guys. but actually, all women.

I really don’t think I’ve done this book justice. I read it over a week ago and really should have at least made notes but I was desperate to get some netgalley books in in time and I’ve just put it off. I want to rave about the whole thing but I was trying to avoid any spoilers…