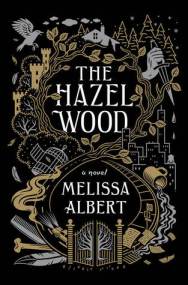 Thank you to Netgalley and the Publisher for the chance to read this book in exchange for an honest review.
Publish Date: 8th February 2018

Seventeen-year-old Alice and her mother have spent most of Alice’s life on the road, always a step ahead of the strange bad luck biting at their heels. But when Alice’s grandmother, the reclusive author of a book of pitch-dark fairy tales, dies alone on her estate – the Hazel Wood – Alice learns how bad her luck can really get. Her mother is stolen away – by a figure who claims to come from the cruel supernatural world where her grandmother’s stories are set. Alice’s only lead is the message her mother left behind: STAY AWAY FROM THE HAZEL WOOD. To retrieve her mother, Alice must venture first to the Hazel Wood, then into the world where her grandmother’s tales began . . .

This review was meant to go up last week, however I left it pending so that I could review it before posting and then we lost our internet and had to argue with our provider over the fact that their end said it was fine and yet we had nothing…so that sucked, but it’s back and so here’s the review! (finally…)

I couldn’t really rate this any higher than 3 because even though I really enjoyed the beginning and the ending was quite good I did get a little bored in the middle.
It seemed to switch pace and/or direction somewhere around there, I wasn’t quite expecting it, obviously, and it threw me off my stride some.
I could have done without the weirdness of the second half, though I’m guessing it was the point? It just really didn’t make sense and I have to say I skim read most of it, jumping to more interesting sections.

I don’t think I’ve read a book like this before which was quite nice. It starts off with Alice and her mother having finally settled down after a life on the road. This is new for Alice and she’s struggling a little. When her mother is taken and those around her don’t care, she asks for help from a school friend and they get sucked into all sorts of weirdness.
Some of it is, quite cleverly, backwards. I’d already worked it out when we got there, so I’m guessing it was pretty obvious, as that’s usually something I miss. (No, really!)

There was a little sadness in this book, but as I’ve watched things like Doctor Who and Supernatural I’ve developed the bad habit of refusing to believe things are permanent. Especially in fairy or fantasy books. They can still change!
This doesn’t always work out in my favour and I won’t be telling you if it did here because spoilers….
I don’t think I had a favourite character because I was too busy being suspicious of them all. I wouldn’t exactly say I liked Alice but she was a nice main character to follow around, by which I mean it was nice she was so different to the ones I usually follow around.

As I was writing this review, I discovered this is book 1, as in there will be more than one book. I thought it wrapped everything really neatly in this one so maybe book 2 will be related rather than a follow on?
Also, book 2.5 is apparently going to be Tales from the Hinderland.
Yeah, no.
Having read a book about why it was a bad idea to read that book, you think we want to read it?!
Because you’re totally right…