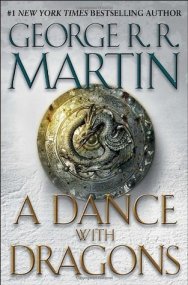 In the aftermath of a colossal battle, the future of the Seven Kingdoms hangs in the balance—beset by newly emerging threats from every direction. In the east, Daenerys Targaryen, the last scion of House Targaryen, rules with her three dragons as queen of a city built on dust and death. But Daenerys has thousands of enemies, and many have set out to find her. As they gather, one young man embarks upon his own quest for the queen, with an entirely different goal in mind.

Fleeing from Westeros with a price on his head, Tyrion Lannister, too, is making his way to Daenerys. But his newest allies in this quest are not the rag-tag band they seem, and at their heart lies one who could undo Daenerys’s claim to Westeros forever.

Meanwhile, to the north lies the mammoth Wall of ice and stone—a structure only as strong as those guarding it. There, Jon Snow, 998th Lord Commander of the Night’s Watch, will face his greatest challenge. For he has powerful foes not only within the Watch but also beyond, in the land of the creatures of ice.

From all corners, bitter conflicts reignite, intimate betrayals are perpetrated, and a grand cast of outlaws and priests, soldiers and skinchangers, nobles and slaves, will face seemingly insurmountable obstacles. Some will fail, others will grow in the strength of darkness. But in a time of rising restlessness, the tides of destiny and politics will lead inevitably to the greatest dance of all.

“49 hours remaining” is a little daunting in an audio book and while there were some parts I happily didn’t pay attention to, other bits were really good! Again, the way that Roy Dotrice narrates meant that I listened to it at 1.2 speed. I forgot about that to be honest, until I listened to my next book and the guy spoke way to fast to follow…

So I’m all up to date in the land of A Song of Ice and Fire (barring prequels) and I’m surprised that there wasn’t more difference between the books and the show, A Game of Thrones. I mean, there were a few and some were pretty major, but they’d condensed characters so it kind of made sense.
There were also things that I’d heard happened in the books that never actually did, for example;
The Night’s Watch were not castrated to make sure they kept their vows – that was rapists – a suitable punishment.
Cersi did not hire sell sword companies, though I won’t say why any of them were anywhere

This was a lot better than the book before, probably because the more interesting characters were in this one. A lot less Cersi. Unfortunately there was less of others too and they were left in precarious situations! I felt sorry for Jon, he was surrounded by idiots and they had no idea what was going on at all because they didn’t pay attention and he’s paid for it. Of course, the missing fact about his connection to Ghost in the show might become more apparent from here on out. I have  been waiting for it to come out, with all of them really, but only Bran seems to have any idea. I wish that Lady hadn’t been killed though, that would have been amazing. Still, there’s room there for something else, maybe…

There were narrators in this I didn’t care about, like the last. New ones that I had not sentiment over and I just wanted them to get on with it. Also George has the really bad habit of having everyone around a character narrate while something happens to them, without that character having a chapter and I like seeing things from them – which is probably why he did it.

The other points about language and so forth in my previous reviews of this series still stand. And I look forward to not being paranoid that the horrific language can be heard by others while sitting in traffic.

Goodreads tells me that 3 more books are planned. With only one more series of the show to come, I can’t possibly fathom what would take 3 books! (Especially if they are this length) But then the show is ahead and the show doesn’t have young Griff or Lady Stoneheart to name but a few differences.
All the miss interpretations of the ‘prophecies’ and some of the things people are saying are hilarious and I love it all! Looking forward to the conclusion of all of that. Might even be worth a re listen just to laugh at people, not that I do that ever….
I’ve just had a thought – multiple views of the same events!! Ok, that I am behind…
Bring it on!