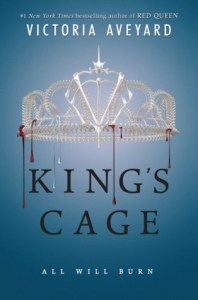 Mare Barrow is a prisoner, powerless without her lightning, tormented by her lethal mistakes. She lives at the mercy of a boy she once loved, a boy made of lies and betrayal. Now a king, Maven Calore continues weaving his dead mother’s web in an attempt to maintain control over his country—and his prisoner.

As Mare bears the weight of Silent Stone in the palace, her once-ragtag band of newbloods and Reds continue organizing, training, and expanding. They prepare for war, no longer able to linger in the shadows. And Cal, the exiled prince with his own claim on Mare’s heart, will stop at nothing to bring her back.

When blood turns on blood, and ability on ability, there may be no one left to put out the fire—leaving Norta as Mare knows it to burn all the way down.

King’s Cage picks up from where we left Mare, a prisoner in the clutches of the mad and slightly sexy King Maven. We watch as Mare struggles with the loss of her powers and the loneliness of confinement, all while Maven uses her as a weapon against the Scarlet Guard. Maven puts her on display as his ‘Guest of Honor’ which slowly draws other reds with power to Maven rather than the safety of the Guard. Will she ever escape? Will the others come to rescue her…again? And when an alliance is made between unknown forces, will everything the Scarlet Guard dreamed of, be destroyed?

Mare was her usual moaning, self-absorbed self in this book and spent a lot of time wallowing in self-pity. I have never been a real lover of Mare. I find her behaviour rather irritating and don’t understand how she can’t do anything for herself. In this book we spend a lot of time reading about her inner thoughts and it’s so infuritating but we thankfully received some relief from this pity party in the form of Cameron. I do enjoy Cameron as a character and relished every chapter that was in her point of view. She’s very dark humored and prickly and I totally get why. It was good to see more of her story and how she’s grown as a member of the Guard. I also loved having updates on Farley, I SO SAW THAT STORYLINE COMING, but I’m so glad it did!

While I may not appreciate the attraction Mare holds, I can appreciate the dark and sinister, and totally one sided romance, that continues to grow with Maven. It’s complicated and twisted but never fails to draw me back into the story. There’s something about him that makes you wish that deep down, there’s something good about him, something worth saving, but I won’t hold my breath. This romance was still so much more intriguing than the on going blah-fest that’s continued between Mare and Cal. I just don’t get it! I DON’T GET IT, I SAY!

I was surprised by the Evangeline chapters, but good surprised. I loved seeing her side of things. I may even love her a bit now, a thoroughly fascinating insight into an otherwise cruel character. Maybe we should have more of these from a few of the other characters that lack a little muster?!

In all honesty though, if it wasn’t for the fact that War Storm is the last book in this series, I would be seriously considering not picking up the next book. In my opinion there are better YA Fantasies out there that don’t seem to be stuck on repeat and these books are always sooo long! (I felt I needed to start weight training just to pick this one up). But as War Storm is the last book there is every likelihood I will pick it up… I’m self-punishing like that.