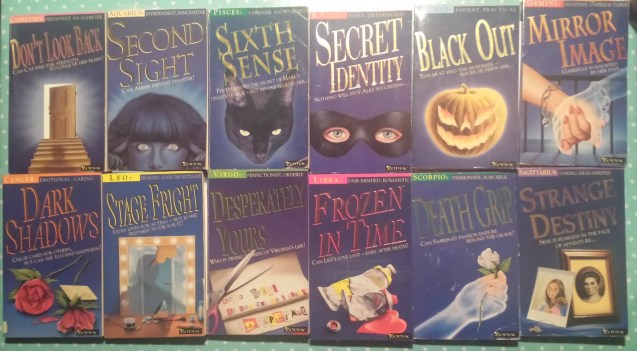 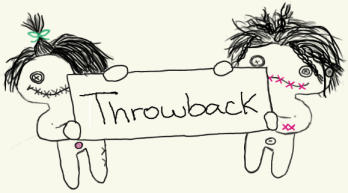 “Twelve signs of the Zodiac, Twelve compelling tales to keep you in suspense….”

I first read these books at school and I’ve had some trouble tracking them down.

Jahnna N. Malcolm is the pen name of Jahnna Beecham and Malcolm Hillgartner, which they have used, according to wiki, to write several series, but not including the Zodiac books because apparently they aren’t a series, even goodreads is a little sketch on this too….

Probably along the lines of the point horror books, these are the stories of individuals that perhaps personify they personalities of each star sign and their adventures, under cover adventures, murder, romance etc. I don’t think I ever read them all, (not sure our library even had them all!), though I have FINALLY managed to complete my collection, I hope to get to it sometime.

(This is apparently the first book in the series and my favourite!)

Alex is a great musician. She’s also a girl. Frustrated at not being taken seriously, Alex disguises herself as a boy and it works – too well. Her ban is a hit but if it becomes even more successful, will she be stuck as a boy forever?

Tess cant remember much. Except that the Halloween party went wrong. There was a fire and people were trapped. But it wasn’t an accident. Tess knows who the murderer is – if only she could remember…her patience is put to the test in a deadly waiting game.

Gabrielle is desperate; someone is tormenting her, or is it her imagination? Is she the victim of split personality? Or is a ghost from the past driving her insane?

Chloe works tirelessly in her garden to create something beautiful – and to recover from her mothers death. But everything dies. Until a secret helper transforms the garden at night. Who is he? Does he need Chloe as much as she needs him?

Lydia loves to perform. As an actress, she’s the best. Until her home is robbed. until she’s almost run over by a car. Until she gets upstaged. Someone wants to hurt Lydia. Someone jealous of her success. Someone driven by an urge beyond their control.

Virginia is always in control. So when disturbing letters arrive at her school newspaper office from someone signed Desperate, it is Virginia who deals with them. But when a friend dies, a photograph is maliciously destroyed and the letters from Desperate become more threatening…Virginia’s orderly world is tested to the limit.

Lily lives for her painting. With her boyfriend, she creates a mural that grows ever more beautiful as her own life becomes harsher. Then her boyfriend is killed by a gang. Has Lily lost him forever? If only she could be with him still in the beautiful world of the painting…

Sabrina loves with a fierce intensity – even those who have died. First her mother drowns and then Matt…can his death really have been an accident or was it cold-blooded murder? Sabrina is determined to discover the truth – even if it means enlisting the help of a spirit from beyond the grave.

Skye is a star athlete. She’s playing football when she knocks her head and is concussed…and wakes ones hundred years ago, in the middle of a mystery. Skye must return to the present to find the key to the mystery – but she doesn’t want to leave someone she has met in the past…will she ever see him again?

Cat is terrified. Her nightmares have returned. The house with the tiny staircase and the door…the door that Cat never opens. But Cat is determined to conquer her dears. She has made new friends and wants to keep them. Then one night at a slumber party she finds that door. The door from her dreams. And the person behind it.

Amber has always been different. She discovers that she has special powers that frighten her. Her dreams about other people come true – with dramatic results. Can she really control other people’s lives? Can she control her own? When disaster strikes at a rodeo, Ambers powers are put to the test.

Phoebe is a loner. She can sense when something’s wrong, but people distrust her and are afraid of her premonitions. Then Mark Chenier disappears. Images grow in phoebe’s mind – she knows where Mark is, but no one believes her. Can Phoebe prove that she’s right – and will her search be worthwhile?

These were great books to read as a teenager and I do sort of wish there were more like them!