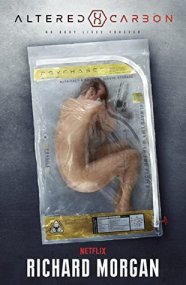 “The human eye is a wonderful device. With a little effort, it can fail to see even the most glaring injustice.”

It’s the twenty-fifth century, and advances in technology have redefined life itself. Human consciousness can now be stored in the brain and downloaded into a new body (or ‘sleeve’), reducing death to a minor blip on the screen. Onetime U.N. Envoy Takeshi Kovacs has been killed before, but his last death was particularly painful. Resleeved into a body in Bay City, Kovacs is thrown into the dark heart of a shady, far-reaching conspiracy that is vicious even by the standards of a society that treats existence as something that can be bought and sold. For Kovacs, the shell that blew a hole in his chest was only the beginning.

When I saw this on Audible I was surprised and excited because I’d loved the Netflix show and I didn’t know that it was originally a book. I bought it even though I wasn’t sure I liked the narrator, but it was a small sample and I thought I’d love the story enough to not worry about it.
Except that this was very different to the show. Surprisingly so.

Envoys seem to be a completely different thing in the books from the show and completely different characters seem to be important so I spent some time confused. I’m guessing that some of the difference comes from the fact that they probably used information from all through out the whole book series to make the show, so listening to the first book, I’m already in possession of a lot of information I shouldn’t have. I have no idea what pieces of it are relevant though…
For example a very important person in the show doesn’t appear in this book, except for a mention or two and I’m not even sure if they were mentioned as part of the story or as quotes at the start of different sections of the book. I’m pretty sure the name was mentioned at least twice though. Will they show up later in the books or were they brought more dramatically to life in Netflix?

I have to say I enjoyed the story arc of the show more than this. It might be because this doesn’t really dwell in the past as much, but it’s certainly because I like the show envoys more than the book ones! Not that these ones are bad, but I like what I think I know of their history better.
Despite being set in the future it had a very 90′s feel – which makes sense as this was first published in 2002! I quite liked this and despite my original thoughts I might consider continuing this story at a later date. I’d have to keep up with the audiobooks though I feel and I’m really not sure about the narrator at all. I think it’s the accent (American), most or all of my narrators so far have been British because I find them more comfortable to listen to.

This is an interesting world and actually it’s not really a bad story. If I hadn’t seen the show I think that I might have liked this more even with all the similes rolling around – I remember there being a lot but that might just be because each one of them annoyed me quite unreasonably.
I ended up putting this book onto 1.25 speed again for the end. I’m not sure if I was impatient for it to be over of if I was just getting annoyed with the weirdly placed long pauses.
There weren’t as many cross sleeving’s in the book (when you’re put in a body not of the gender you were born) perhaps because it’s more visually rewarding. I hope it happens more in later books because it’s quite interesting and one of the characters had a point!
The prison system was weird – you were put on stack, so basically you were sort of ‘switched off’ for your term. So 100 years later you’d be out again but it would be a blink of an eye thing.
They should have been put into virtual and ‘done time’ – imagine that – if weeks or months in virtual takes only minutes in realtime you’re really not going to want a realtime sentence of 100 years!!! Agh.

Of course, Kovacs (pronounced Kovatch) was my favourite character. He was clever and well skilled and actually quite laid back for all that he was pulled away from home etc.
I can’t tell you who was my least favourite character because any one I manage to pick would be a spoiler! But I will say it was sometimes hard to keep track of people – and not just because they kept turning up in different bodies! Though sometimes they did that on purpose.

I’m definitely not as against furthering my experience of the books as I was half way through this one but I won’t be rushing into them any time soon.