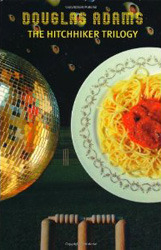 “The renewed shock had nearly made him spill his drink. He drained it quickly before anything serious happened to it. He then had another quick one to follow the first one down and check that it was all right.”
“[he] sent a third drink down to see why the second hadn’t yet reported on the condition of the first.”
“He poured a drink down his other throat with the plan that it would head the previous one off at the pass, join forces with it and together they would get the second to pull itself together. Then all three would go off in search of the fuss, give it a good talking to and maybe a bit of a sing as well.
He felt uncertain as to whether the fourth drink has understood all that, so he sent down a fifth to explain the plan more fully and a sixth for moral support. “
-Pages 62 & 63

Why it is a mistake to think you can solve any major problems just with potatoes … How the planet Krikkit, hostile to anything that is not Krikkit, comes to be encased in a Slo-time envelope… Why Arthur Dent has such an urgent wish to return the Ashes to Lord’s Cricket Ground, and why a can of Greek olive oil becomes his most prized possession, symbolising as it does the oneness of things … How the campaign for Real Time is determined to reverse the erosion of the differences between one century and another caused by easy time travel…. All these mysteries and more come to light in this, the second volume of the Hitchhiker trilogy. Follow Arthur Dent on a day which begins with his visit from Wowbagger the Infinitely Prolonged (whose goal is to insult everyone in the Universe – alphabetically) and ends with the Truth, the Whole Truth and Nothing but the Truth – which turns out to have entirely too much to do with frogs.

No box post for you today, so let’s talk about Life, The Universe and Everything. Don’t panic, I’m not being philosophical, I mean the book.

There is only one word to describe this book and that has to be: what?!?!

I’m not exactly sure what happened.
I WAS listening to this as an audiobook while shovelling snow several weeks ago, lots of snow.
So while I think we’re meant to be thinking “what?”, perhaps I missed some pieces of the story.

What I DO know is that Slartibartfast is back, there’s a murderous fly after Arthur, he’s late saving the universe again and to top it off he’s got someone else’s towel.

Obviously Arthur is my favourite character, Periodically he says “I need a cup of tea.” and I realise that I too need a cup of tea. Zaphod isn’t my favourite, but he’s humourous and Ford is good value for money – I always imagine Mos Def who played him in the most recent film adaption when I think of Ford. Trillian didn’t seem to be in this much. Maybe because she wasn’t with Arthur and this is mostly a book about Arthur. Hopefully she’ll be in the next one more. She’s clever.

I have mixed feelings about the scene with Thor, but I liked how Arthur dealt with him. That was cleverly done Arthur – he’s not the smartest but he’s actually quite clever.
This is narrated by Martin Freeman – who played Arthur perfectly in the most recent adaption so he pulls off all the “No, sorry, what?” sentences perfectly.

There were some things in this that I expected to connect, they may do in later books of course but that confused me – maybe it was way too obvious a loop or it’s going to get more complex before it loops back. These books are fantastically ridiculous and wonderfully British. Full of manners and tea and cricket. And a planet called Krikkit.