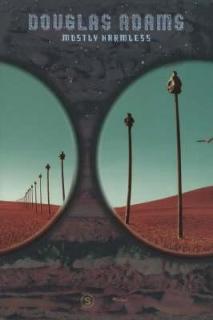 “Nothing travels faster than the speed of light, with the possible exception of bad news, which obeys its own special laws.”

It’s easy to get disheartened when your planet has been blown up, the woman you love has vanished in a misunderstanding about space/time, the spaceship you are on crashes on a remote and Bob-fearing planet, and all you have to fall back on is a few simple sandwich-making skills. However, instead of being disheartened, Arthur Dent makes the terrible mistake of starting to enjoy life a bit and, immediately, all hell breaks loose.

Hell takes a number of forms: there’s the usual Ford Prefect form of hell, fresh hell in the form of an all-new version of The Hitchhiker’s Guide to the Galaxy, and a totally unexpected hell in the form of a teenage girl who startles Arthur Dent by being his daughter when he didn’t even know he had one.

Can Arthur save the Earth from total multidimensional obliteration? Can he save the Guide from a hostile alien takeover? Can he save his daughter, Random, from herself?

Of course not. He never works out what is going on, exactly.
Will you?

These are getting ridiculous now! Bizarrely they remind me of some of the stories my friends and I wrote when were in school.
They make about as much sense.
By which I mean none at all, which is completely on purpose.

I think mostly I love the IDEA of these books and I think they translate quite well visually. To read them though, I think I would have struggled because they would requite a certain level of focus I don’t seem to have at the moment. Thank goodness for audio books!

Poor Arthur really can’t catch a break! I’m beginning to feel sorry for him, though he’s not wanting tea as much so that’s upsetting. He seems to be getting better at taking things in his stride now, so there is that. Ford gets up to some good antics and Random…well, it’s in the name. There isn’t much else to say about this book really that isn’t covered in (some of ) the blurbs…I don’t want to give anything else away.

These books are quite entertaining, but I think you need to be feeling a bit ridiculous yourself to fully appreciate the cleverness of them. Needless to say, that is not how I feel when stuck in traffic.
I think I’d like to listen to these dramatised and see what difference that makes.