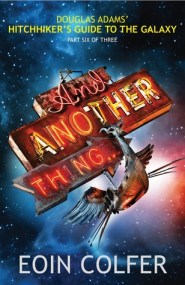 “The Hitchhiker’s Guide is a hundred percent accurate. Reality, however, is not as reliable.”

Arthur Dent’s accidental association with that wholly remarkable book The Hitchhiker’s Guide to the Galaxy has not been entirely without incident.

Arthur has traveled the length, breadth, and depth of known, and unknown, space. He has stumbled forward and backward through time. He has been blown up, reassembled, cruelly imprisoned, horribly released, and colorfully insulted more than is strictly necessary. And of course Arthur Dent has comprehensively failed to grasp the meaning of life, the universe, and everything.

Arthur has finally made it home to Earth, but that does not mean he has escaped his fate.

Arthur’s chances of getting his hands on a decent cuppa have evaporated rapidly, along with all the world’s oceans. For no sooner has he touched down on the planet Earth than he finds out that it is about to be blown up…again.

And Another Thing…is the rather unexpected, but very welcome, sixth installment of the Hitchhiker’s Guide to the Galaxy series. It features a pantheon of unemployed gods, everyone’s favourite renegade Galactic President, a lovestruck green alien, an irritating computer, and at least one very large slab of cheese.

This felt like it was trying too hard. I’m not sure if it’s because I knew it was a different author or if it was just because it had a different narrator or what but it was bothersome.

I believe Adams had written some of this and Colfer was commissioned to finish it? I’m not sure, either way, Adams didn’t write enough. It’s been likened to professional fan-fiction and that seems accurate. It’s not quite out there to be stereotypical fan-fiction (y’know, where everything’s just a little too off and everything’s a little too crazy) but it’s close.

There were times I enjoyed the book but mostly I found it to be the wrong kind of weird. I’m pretty sure there were even moments when I was also really annoyed – but as I was driving when I listened to them, I couldn’t note them down which is fantastic for reviewing because I can’t remember what they are now and I can’t flick through the books because I don’t have a physical copy of this one…

The lovestruck green alien was rather annoying and I’m not sure what Zaphod was doing back.
The Thor storyline was interesting – especially as I kept imagining Chris Hemsworth! And I think the ship was supremely cruel to Arthur. Also, he didn’t seem to worry about tea nearly as much as he should.
Random was annoyingly written and Trillion wasn’t much better. The whole attitude was something I didn’t like.

The ending was almost fantastic except, instead of leaving it the way it was, there was a swan dive into totally-setting-up-for-a-book-7.
I think I’ll be stopping here.