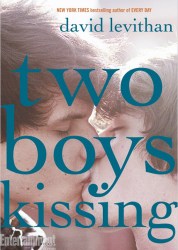 Harry and Craig are two 17-year-olds who are about to take part in a 32-hour marathon of kissing to set a new World Record. They aren’t dating but they used to.
Neil and Peter have been together for a year or so, but their relationship is still quite new.
Avery and Ryan meet at gay prom and Cooper doesn’t feel anything any more.

I’m not sure what I was expecting, but this wasn’t it. This is not a story about two boys kissing to beat a record. This is a book which is “narrated by a Greek Chorus of the generation of gay men lost to AIDS” as they witness what goes on in these 7 boys lives. If you’re after a sweet novel about two young men written much like most teen books are these days, this is not what you’re after. It’s a book that gives you glimpses into the lives of each of these boys in a roughly 72 hour period. You never learn much about each boy, just enough for you to hope and dream for them. Truly it’s about those that died and the wonder they must hold for how far we’ve come, fear for how far we have yet to go and the sadness they surely feel for not being a part of it.

It’s a book about potential. A book to remind the lost that they are not alone, they should not be alone and if they are it is through no fault of their own. This will remain on my shelves even if I never read it again. It needs to be there.