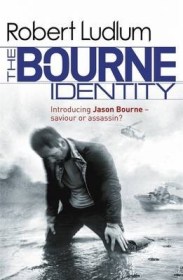 “I was proven right. I stand on that!”
“You’re not going to stand on anything General, you’re going to fall right on your iron arse. Because The Monk was right, your man is the best, with or without a memory. He’s bringing [him in]. Delivering him right to your god damn front door.”
20h:36m:21s

He has no past.
And he may have no future.
His memory is blank.
He only knows that he was flushed out of the Mediterranean Sea, his body riddled with bullets. There are a few clues. A frame of microfilm surgically implanted beneath the flesh of his hip. Evidence that plastic surgery has altered his face. Strange things that he says in his delirium — maybe code words. Initial: “J.B.” And a number on the film negative that leads to a Swiss bank account, a fortune of four million dollars, and, at last, a name: Jason Bourne.

But now he is marked for death, caught in a maddening puzzle, racing for survival through the deep layers of his buried past into a bizarre world of murderous conspirators — led by Carlos, the world’s most dangerous assassin.

And no one can help Jason Bourne but the woman who once wanted to escape him.

Ok, so I’ve read this previously and found it some kind of hard work. This time I listened to it – considering how much more successful that’s been with harder books and boy was it the best! I was all for working my way through this series – only I’ve just discovered it’s 15 books long. What the heck?!

Obviously with a book like this there will be a certain amount of book vs film comparison. If that’s not what you’re hear for, please skip the next paragraph or so.
I was lead to the books via the films. I love the films (aside from the last one, I pretend that never happened) and as is often the case I wanted to know more. There was a lot more to know! And while I still love the films, I love the storyline of this book more.
Both characters have a grey area – which is important because people have grey areas but book grey area just works better.
Having met book Marie, I’m mad at what they did to her for the film. They took away her clever. She’s great input in the book into a lot of Jason’s life. She helps him work out the truth and is often the voice of reason. Not to mention she’s pretty handy in their financial situations considering she’s god a doctorate in the subject. Film Marie is just as valid of course, but I’m just annoyed they took a clever woman and turned her into a driver.

I do have to say though, that I was REALLY unimpressed with the descriptions of the women. If you’re focusing so much on how their assets are shown off by their clothes that you forget if they’re wearing a dress or a blouse, you’re doing it wrong.
PLUS! Even in death they were sexualised. I mean really! That’s just gross.

I’m not sure what else the films got from the books, it has to have been more than just a name and a vague idea, so I’m guessing I’ll find out more as I work my way through them. I look forward to it. I really do recommend the audio book! Especially if you found the book hard or if big books intimidate you. The narrator is really good with accents and there are sentences in various languages that aren’t given translation – you don’t get one when reading it either.

Also, in case you didn’t know,  Jason Bourne was inspired by Operation Mincemeat, I’m not sure if the whole series was, or just within the book but either way it’s still pretty clever and I love it!
If you don’t know what Operation Mincemeat was, I recommend you google it.
It was genius.