Top Ten Tuesday was created by The Broke and the Bookish in June of 2010 and was moved to That Artsy Reader Girl in January of 2018.
It was born of a love of lists, a love of books, and a desire to bring bookish friends together.
This weeks topic is Top Ten Best Character Names 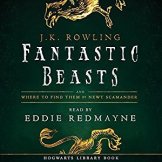 1 Newt Scamander from Fantastic Beasts and Where to Find Them

JK Rowling is fantastic with names, but I think this is my favourite. It’s just so clever

2 Amar from The Star-Touched Queen

This is just such a smooth name.
Also, I love this character!

3 Iseult from The Witchlands series

To be honest, I’m not quite sure how to pronounce this. But it’s definitely the name of someone whose going to get up to great things.

4 Gavriel from The Coldest Girl in Coldtown

I love this character too and this is the perfect name for him. It seems to demand time while saying it, which he has plenty of.

5 Acheron from The Dark-Hunter series

Acheron, named for the river of woe. Unfortunately a very fitting name for this guy. But he powers through and really, this is a lovely name to say. (much nicer than his brothers)