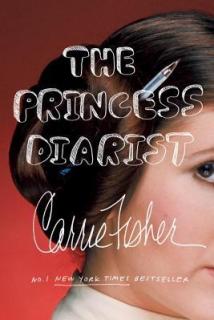 “If you look at the person someone chooses to have a relationship with, you’ll see what they think of themselves.”

The Princess Diarist is Carrie Fisher’s intimate, hilarious and revealing recollection of what happened behind the scenes on one of the most famous film sets of all time, the first Star Wars movie.

When Carrie Fisher recently discovered the journals she kept during the filming of the first Star Wars movie, she was astonished to see what they had preserved—plaintive love poems, unbridled musings with youthful naiveté, and a vulnerability that she barely recognised. Today, her fame as an author, actress, and pop-culture icon is indisputable, but in 1977, Carrie Fisher was just a (sort-of) regular teenager.

With these excerpts from her handwritten notebooks, The Princess Diarist is Fisher’s intimate and revealing recollection of what happened on one of the most famous film sets of all time—and what developed behind the scenes. And today, as she reprises her most iconic role for the latest Star Wars trilogy, Fisher also ponders the joys and insanity of celebrity, and the absurdity of a life spawned by Hollywood royalty, only to be surpassed by her own outer-space royalty. Laugh-out-loud hilarious and endlessly quotable, The Princess Diarist brims with the candour and introspection of a diary while offering shrewd insight into the type of stardom that few will ever experience.

I can’t remember why it is that I mentally added this to my to-read list beyond someone made a comment about it and I thought ‘gosh that sounds interesting’.

While I wasn’t wrong exactly, the focus of this book is heavily features Carrison (Carrie/Harrison) and this wasn’t what I was expecting. I was thinking more behind the scenes shenanigans – just not THIS kind of shenanigans.

I liked that Carrie read it herself – aside from the word for word diary entries – a younger sounding woman read those.

Her views of comicon etc were interesting too. And wow those signature and photo op things are expensive!
And if those interactions had any truth to them at all, she met some really odd people! Lovely, but odd. She sort of fell into being famous too, she didn’t expect to be any sort of famous at all, just sort of fell into little films because she could and then Star Wars sort of exploded! So that just sort of makes the whole thing worse!

Her observations and experiences were interesting to listen to and I would recommend this book, with the emphasis that it talks about Carrison, so expect that!
There isn’t really much else I can say without getting to into details that would be classed as spoilers and I’m not going to do that.
I might see if I’m interested in any other pieces of her work however.