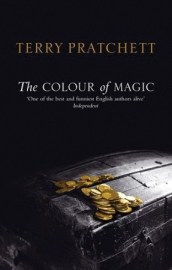 “My name is immaterial,’ she said.
That’s a pretty name,’ said Rincewind.

In the beginning there was…a turtle.

Somewhere on the frontier between thought and reality exists the Discworld, a parallel time and place which might sound and smell very much like our own, but which looks completely different. Particularly as it’s carried though space on the back of a giant turtle (sex unknown). It plays by different rules.

But then, some things are the same everywhere. The Disc’s very existence is about to be threatened by a strange new blight: the world’s first tourist, upon whose survival rests the peace and prosperity of the land. Unfortunately, the person charged with maintaining that survival in the face of robbers, mercenaries and, well, Death, is a spectacularly inept wizard…

Huh?
I listened to this an an audio book. It was read by Nigel Planer who was great top listen to (except for the echo-y Death voice}, however the editing was terrible.  There are no chapters in the book, but I don’t even remember the audio book being broken up into it’s sections either. Certainly, where there were changes of focus, between characters etc, there was no gap. This is confusing and meant I had trouble keeping up with what was going on, which impacted my enjoyment of the whole affair. Therefore I recommend that you read the book over the audio book! Or at least, read along with the actual book to start with so that you can see what’s going on and get used to it!

It felt like we were joining in the middle of a story, though this is book 1 (I’ve checked and it says it on the cover and everything). Perhaps I needed to pay more attention than I did.

Rincewind is having to deal with the very first tourist – Twoflower – and his luggage. His life depends on it. At the same time this whole affair seems to be a game? I don’t know. Anyway, Rincewind is in charge of this tourist because he can speak his language. Perfectly reasonable reason. However, I want to know how Twoflower was able to communicate with the Hero Hrun later on?!
I LOVED the luggage, it was hilarious and ridiculous and I want one.

Also, something that really bothered me was at one point, there was mention to gravity affecting a certain tribe and particularly the women in a weird way. Now, not to be uncouth, but I’m pretty sure it would have affected the men in a far, far stranger way!

The writing of this book reminded me much of Douglas Adams, the random element to the whole thing and the extra odd bits and pieces that are completely ridiculous and amusing. This is clearly a different setting however and I do intend to try and keep going. I have been delaying entering this world because it’s so vast and loved by so many, I was concerned that I would completely miss the point. I don’t think I’ve found it yet but I’ll give another audio book a go and if that’s still dodgy, try reading the 3rd one myself!