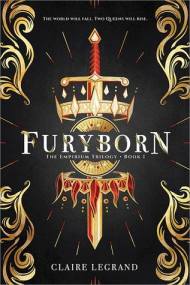 Thank you to Fairyloot and the Publisher for the chance to read this book in exchange for an honest review.
Publish Date: 22nd May 2018

Follows two fiercely independent young women, centuries apart, who hold the power to save their world…or doom it.

When assassins ambush her best friend, the crown prince, Rielle Dardenne risks everything to save him, exposing her ability to perform all seven kinds of elemental magic. The only people who should possess this extraordinary power are a pair of prophesied queens: a queen of light and salvation and a queen of blood and destruction. To prove she is the Sun Queen, Rielle must endure seven trials to test her magic. If she fails, she will be executed…unless the trials kill her first.

A thousand years later, the legend of Queen Rielle is a mere fairy tale to bounty hunter Eliana Ferracora. When the Undying Empire conquered her kingdom, she embraced violence to keep her family alive. Now, she believes herself untouchable–until her mother vanishes without a trace, along with countless other women in their city. To find her, Eliana joins a rebel captain on a dangerous mission and discovers that the evil at the heart of the empire is more terrible than she ever imagined.

As Rielle and Eliana fight in a cosmic war that spans millennia, their stories intersect, and the shocking connections between them ultimately determine the fate of their world–and of each other.

I’m not sure I’d have chosen this book for myself. The fact that one of the main characters was going to turn out ‘bad’ and that it was going to have some sort of split for the two characters would have perhaps put me off. However, I received an ARC copy in a Fairyloot box and I’ve read it and I’m glad I did!

The book is written in alternating chapters, with a prologue set two years after Rielle’s parts.This may seem odd but It makes sense in the writing.

Rielle was arrogant – but then she had cause to be. I wonder how long she subconsciously knew she was one of the queens. I mean they’re the only ones who can wield ALL types of elemental magic and even if she didn’t realise she could wield all of them, she knew she could wield more than one.
Ludivine was strange but Audric was more interesting – perhaps because if the Prologue in which I don’t believe Ludivine featured.
I started the book not liking Rielle, because she’s set up obviously to be the bad guy, the Blood Queen. But having now read the book I know there’s lots more to it than that and I’m far more curious than I thought I’d be about how they get from here to the prologue and I look forward to catching up wit them in book 2.

Eliana also seemed arrogant – but she too had some cause to be. It also felt like she was trying to be someone she wasn’t deep down. I don’t think it was my interpretation, because she did a few things against this ‘person’ she was presenting to the world and I remember her addressing it in her thoughts at one point. I look forward to seeing her settle into the person she truly is over the rest of the series.
I was most interested about Eliana’s chapters, partially because of Red Crown member  The Wolf. He was a ‘wait a minute…’ character and I enjoyed the mystery. I look forward to finding more out about him too. We can’t have learnt it all, surely.

I will definitely be continuing this series – though I can’t think of any books similar to it to base recommendations off of…but if you’re like me and are less likely to pick up a divided book that spends half the time with the ‘bad guy’ don’t let that put you off. I really don’t think everything is as it seems.
I also think the words of the prophecy are important and that something has been missed…