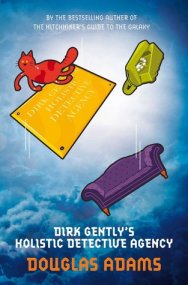 “So long and thanks for all the, uh ah.”

What do a dead cat, a computer whiz-kid, an Electric Monk who believes the world is pink, quantum mechanics, a Chronologist over 200 years old, Samuel Taylor Coleridge (poet), and pizza have in common? Apparently not much; until Dirk Gently, self-styled private investigator, sets out to prove the fundamental interconnectedness of all things by solving a mysterious murder, assisting a mysterious professor, unravelling a mysterious mystery, and eating a lot of pizza – not to mention saving the entire human race from extinction along the way (at no extra charge). To find out more, read this book (better still, buy it, then read it) – or contact Dirk Gently’s Holistic Detective Agency. ‘A thumping good detective-ghost-horror-whodunnit-time travel-romantic-musical-comedy epic.’ The author

Apparently you can’t get the audio book for the first one anywhere, which is frustrating – I started to listen to what I thought was book one – according to Audible, only to discover it was book 2. At this point I was all set to listen to the great Dirk, that I simply had to settle for the dramatised one. I didn’t think it would be too much of a problem as I love the dramatised Narnia books, but I was a little concerned I’d lose a lot of the story this way.

I enjoyed this a lot more than I thought I would. I think I liked this more than The Hitchhikers Guide to the Galaxy.
It was nothing like the BBC film or the netflix show – the only similarities being a time machine and “The fundamental interconnectedness of all things.” in a fantastic and crazy manner.
{speaking of which, are these set in the same world as THGTTG?!}
And, BONUS POINTS for the above quote!!! Is that in the actual book too?! I hope so…

I also like how they explained him in this. “He tells you he’s not something and then proceeds to prove he is.” completely by accident….
And while the voice of Dirk didn’t quite go with my idea of Dirk, it was still well dramatised and I’d consider listening to dramatised version of the others too!