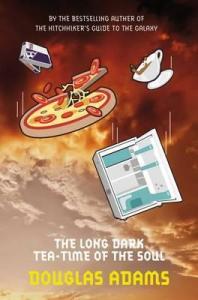 “I may not have gone where I intended to go, but I think I have ended up where I needed to be.”

When a passenger check-in desk at London’s Heathrow Airport disappears in a ball of orange flame, the explosion is deemed an act of God. But which god, wonders holistic detective Dirk Gently? What god would be hanging around Heathrow trying to catch the 3:37 to Oslo?

And what has this to do with Dirk’s latest—and late—client, found only this morning with his head revolving atop the hit record “Hot Potato”?

Amid the hostile attentions of a stray eagle and the trauma of a very dirty refrigerator, super-sleuth Dirk Gently will once again solve the mysteries of the universe…

What was this?! Not one single cup of tea! I thought this was about tea-time?!

I definitely prefer Dirk to Hitchhikers – which I feel bad about saying because there were plenty of bits of Hitchhikers that I loved.
This was read by Douglas Adams which I liked because I figured it meant that the emphasis would be in all the right places!

Dirk seems to be having a feud with his ‘cleaning lady’ who never seems to clean anything. This means he needs his new client, he needs a new fridge and he could really do without the eagle eagerly trying to capture his attention by dive bombing him. It really doesn’t help that his secretary is missing, part of Heathrow exploded and Mr Odwin wants clean linen. Now, all he needs to do is find out how these things connect…

I love the concept of everything being connected and I love it even more that Dirk believes he will always be where he needs to. It works well for him, mostly and puts me in mind of Doctor Who. The quote I used above (“I may not have gone where I intended to go, but I think I have ended up where I needed to be.”) is very similar to something the TARDIS says to him in more recent episodes and I think that’s a fantastic way to live your life, if you can.
Dirk’s great at it, he just meets all these people that are connected in some obscure way and eventually he works out why. He has such a clever brain – but he’s not psychic!….

Dirk seemed a little out of his element is this one (though as I only listened to the dramatised version for the first, that might be normal Dirk) but he still managed to get everything going in the right direction, even if it was by accident and it didn’t work out the best for him.

The eagle was a surprise. Totally not what I thought at all, how fantastic.
It’s a shame this is the last completed novel of this series and I would have also loved a Dirk/Arthur meet up sometime. That would have been hilarious.
I would definitely recommend Dirk over Hitchhikers, but if you’re unsure of one, try the other!