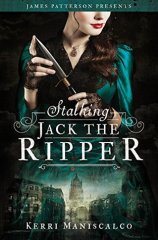 “Those who deserve respect are given it freely. If one must demand such a thing, he’ll never truly command it. I am your daughter, not your horse, sir.”

Presented by James Patterson’s new children’s imprint, this deliciously creepy horror novel has a storyline inspired by the Ripper murders and an unexpected, blood-chilling conclusion…

Seventeen-year-old Audrey Rose Wadsworth was born a lord’s daughter, with a life of wealth and privilege stretched out before her. But between the social teas and silk dress fittings, she leads a forbidden secret life.

Against her stern father’s wishes and society’s expectations, Audrey often slips away to her uncle’s laboratory to study the gruesome practice of forensic medicine. When her work on a string of savagely killed corpses drags Audrey into the investigation of a serial murderer, her search for answers brings her close to her own sheltered world.

I wasn’t sure that this was a book I’d be interested in and didn’t pay it much attention to it even though I’ve seen it all over the place – I don’t think I even read a blurb! Then one day I was wondering what audio book to listen to next and this came to mind, so I bought it!

The sad thing is, the writing style of this might just have put me off had I read it myself. The descriptors seem to be flowery and sometimes too long, but from the perspective of hindsight I think that was on purpose, especially as this is a first person Victorian Lady POV. At the beginning I was rolling my eyes and there was a moment I identified as where I would have maybe DNF’d the book were I reading it, except I think the plot more than made up for that.  So much so that I was listening to it around the house and while I was getting ready for work! It was really interesting and the characters all worked really well together.

I liked the idea of this book – that Audrey could be both beautiful AND smart. [though it would have been even better if it said she didn't NEED to be beautiful at all, but we'll get there]
I also really liked Thomas, the cheeky devil. He sure pushed his luck in the most adorable ways ever. Though I do think they are both being quite improper! How are they getting away with so much?!
And what happened to her suitor? Did he fall out of favour when he fell out of favour? haha

I think that Audrey managed to get away with far too much in this book, but I’m not even mad because I really rather enjoyed it!
I definitely recommend it and hope you give it long enough to let the plot catch you even if the writing doesn’t. I’ll be buying the hardback and diving straight into book 2!
I also now need to get the Audrey and Thomas perfumes from Behind The Pages because reasons….

Mild spoiler for the blurb of book 2 – but they’re heading off to Romania together and they’re not even engaged?! Scandalous!!!